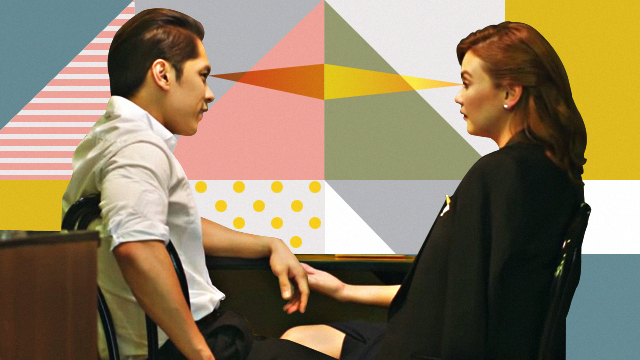 When it comes to rom-coms, nothing ever starts with a boring "hello."

(SPOT.ph) When it comes to romance films, it’s the first meeting—that crucial chance encounter—that sets up the story and reels us in whether we like it or not. Sometimes, the encounter oozes of sparkling chemistry between two strangers. Other times, it’s about them clashing with each other right from the get-go. Whichever it is doesn’t really matter because we know an aww-inducing meet-cute when we see one, and here are 10 of our favorites from recent Filipino films!

Directed by: Joyce Bernal
Sandy Veloso (Kim Chiu) is obsessed with her boyfriend, so when he breaks up with her, she’s evidently distraught. The abrupt breakup leaves her in tears and she decides to spend the night in her office to clean up as she wallows in self-pity. The next day, her company’s new CEO Alex Prieto (Xian Lim) walks into the restroom and hears Sandy sobbing from inside a cubicle. When she opens the door and reveals herself—her white dress dirty, hair unruly, and makeup smudged all over her face—a terrified Alex dashes out of the bathroom. We can't really blame him for firing Sandy immediately after that, can we?

Directed by: Cathy Garcia-Molina
Technically, Athena (Kathryn Bernardo) and Kenji (Daniel Padilla) had their first meeting by the school’s entrance, with the latter nearly running over Athena with his skateboard. While it's a cute (albeit cliché) meeting, we think what really sparks things between them are the missent messages Athena has been receiving on her beeper (raise your hand if you’ve had one of those before!), which should have been for Kenji's ex-girlfriend.

In case you haven't seen it yet, Bernardo and Padilla actually play dual roles in the film, and the meeting between Kenneth (Padilla), Kenji's son, and Kelay (Bernardo), Athena's niece, was pretty cute, too, with Kelay’s funny antics at the airport effectively snagging Kenneth’s attention.

Directed by: Antoinette Jadaone
Distraught and heartbroken, Mace (Angelica Panganiban) finds herself at an airport in Rome struggling to get past strict baggage policies. Anthony (JM de Guzman) steps in and offers to let her use his extra luggage space in the meantime so she can finally check in. What he doesn't know is that he's signing up for a lot more than he intended as the pair forms an unlikely friendship and decide to take a spontaneous adventure together. Then again, he should have expected as much when Mace nonchalantly handed him her lacy underwear within three minutes of meeting him!

Directed by: Mae Cruz-Alviar
Notorious for being a troublemaker, Jackie (Kathryn Bernardo) is sent to the province by her father in the hopes that she'd learn her lesson. Upset at the thought of having to spend time with her mother (who left when she was younger) in Tarlac, she escapes from her supposed ride and secretly sneaks off to look for the nearest bus terminal. She’s talking on the phone when someone snatches it from her hand and runs off. Seeing the scene, Kiko (Daniel Padilla) immediately springs into action and runs after the bad guy… only to be quickly outrun by Jackie, who manages to catch the snatcher herself.

Directed by: Dan Villegas
Provoked by her friends accusing her of being hung up on her ex, Tintin (Arci Muñoz) decides to prove them otherwise by hitting on Jake (Gerald Anderson). She walks up to him, cigarette in hand, and confidently asks him to help her light it up. “I don’t smoke,” he tells her, and she quickly chucks the cigarette away, claiming she doesn’t either and that it's bad for the health. Undeterred, she then offers to buy him a drink, only to learn that he actually owns the resort they're in!

Directed by: Cathy Garcia-Molina
Cali (Liza Soberano) isn’t the type to fool around with guys, so when she ends up getting chosen to participate in a game of Seven Minutes in Heaven with infamous womanizer Gio (Enrique Gil), she doesn’t know what to do. Her wariness doesn’t escape him, so he decides not to make a move once they're alone. In return, he asks her to at least pretend for the sake of his reputation, so they end up faking makeout noises to please everyone who’s listening in.

Directed by: Antoinette Jadaone
Feeling out of place in her own home, Mika (Julia Barretto) decides to go on a road trip to look for, strangely enough, aliens (something she and her deceased mother used to talk about). She makes at a quick stop at a clearing with tall grass so she can pee, not knowing that Caloy (Joshua Garcia) would be taking a dump just a few meters away from her. Thinking he was a pervert, she bolts back to the car, but in her haste to drive away, she accidentally runs over his foot. Guilty, she turns back and decides to give him a free ride. You’ll love the quirky banter that immediately ensues from the pair as they embark on their road trip.

Directed by: Irene Villamor
Medical student Jesse (Carlo Aquino) has always been criticized by his father for prioritizing his music career over his studies. After a particularly bad fight with his dad, Jesse comes across the outspoken Celeste (Bela Padilla). He overhears her conversation with her demanding boss and finds himself fascinated by her frankness and spunky personality. It does seem a little worrisome at first as he discreetly follows her into a coffee shop, but the dynamics between them is a pretty refreshing change—Celeste point-blankly accuses Jesse of stalking her before threatening to call the police. He gives her a fairly acceptable reason and the two end up bonding over their names, which they realize are similar to the names of the characters in a rom-com they’ve both seen before.

Directed by: Dan Villegas
There’s nothing wrong with girls making the first move, and that’s exactly what Pia (Angelica Panganiban) does when she first meets Nix (Carlo Aquino) in a bar. Noticing him constantly looking their way, Pia approaches Nix to strike up a conversation…only for him to tell her he was just waiting for someone. As if things weren’t awkward enough, Pia goes on to tell him a joke about the “Alamat ng Santol” in an attempt to lighten things up, but things only seem to backfire when he doesn't laugh. Anyone who isn’t busy trying not to squeal over the #CarGel feels would be cringing from secondhand embarrassment, but what do we know? They did manage to hit it off after that disastrous encounter after all.

Directed by: Antoinette Jadaone
Sometimes, the best chance encounters are the ones that can actually happen in real life, like the simple yet chemistry-filled meeting between Joanne (Nadine Lustre) and Gio (James Reid) in Never Not Love You. Joanne goes to a tattoo parlor to buy stickers from Gio, a freelance artist. There’s nothing super remarkable about their meeting, but the minimal dialogue (including one with Joanne saying “Gwapo ka nga, pero bingi ka”) coupled with the meaningful glances exchanged between them is enough to leave a lasting impression—or to make you hopeful about getting your own meet-cute!