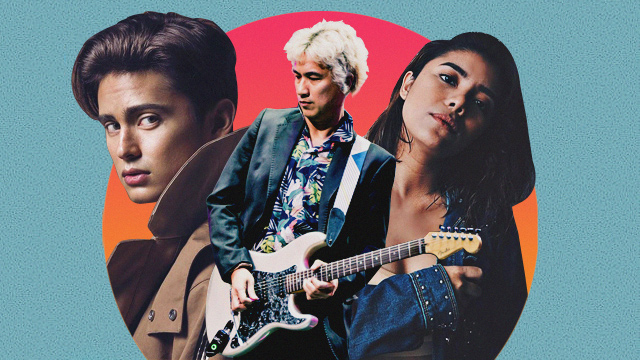 Add these to your playlist, stat!

(SPOT.ph) Perhaps one of the greatest joys of being a music fan is seeing your idols together on stage or in the studio. Hearing their collaborative work and seeing their different styles seamlessly blend can launch butterflies in your stomach. In the last few years, many of our local favorites—both the seasoned veterans and the up-and-coming talents—have been putting their heads together to bring us something highly creative, fresh, and exciting.

Below, we list just some of the must-listen local collabs you need to have in your music library.

"Pariwara" by Ely Buendia and The Itchyworms

It took a few years, but when Ely Buendia and The Itchyworms' first collaborative effort came to fruition, it was definitely worth the wait. Buendia describes "Pariwara" as a song for the youth. The encouraging lyrics paired with a feel-good rock arrangement are an ode to misunderstood millennials. The track is an easy mix of The Itchyworms' fun-loving sound and Buendia's creative genius.

"Bakit Ganyan Ka?" has been an instant favorite and a viral hit upon its release. The sweet-sounding tune uses the rondalla, which is not often heard these days, and marries the musical styles of both artists. Add to that the refreshing electro-pop-rock touches in the song. Parokya Ni Edgar's Chito Miranda and Gracenote's Eunice Jorge share their distinct vocals in this romantic track.

"Off of Center" by Franco and Reese Lansangan

Rock band Franco and indie-pop act Reese Lansangan may first sound like an odd combination, but in "Off of Center" they definitely are not. In this original collab for Coke Studio Philippines, Lansangan shines and holds her own in the midst of OPM veterans. Her usually delicate singing voice shows a great deal of strength in this rock single, while Franco Reyes performs effortlessly like always.

You can always count on Gloc-9 to keep his music socially relevant. For "Norem" (the reverse of "meron" and a slang used in illegal drug transactions), he enlisted the help of young artists J. Kris, Abaddon, and Shanti Dope. The track is a peek into the different POVs of those heavily affected by the government's war on drugs. The music video shows powerful imagery, depicting how a suspected drug dealer dies mercilessly in the hands of the police.

The Ransom Collective teams up with Urbandub's Gabby Alipe and John Dinopol for this kickass Coke Studio Philippines original track. In "Caution to the Wind," Urbandub's signature rock sound is very apparent. Alipe offers a bit of backup vocals toward the end but mainly lets the young talents of The Ransom Collective take center stage—an absolute class act.

Quest is known to regularly collaborate with fellow local artists. In "Unang Hakbang," he inspires alongside fresh talent Keiko Necesario. The song, much like Quest's other releases, is a hopeful anthem that will turn your bad days around and motivate you to start fresh. Quest lets out smooth verses, while Necesario unleashes her soulful croons.

Folk and acoustic favorites Johnoy Danao and Clara Benin are a match made in heaven in "Right Time," a soothing love song about healing and giving romance another chance. Delicate guitars and a simple but memorable arrangement accompany Danao and Benin’s gentle voices that perfectly capture all our feelings.

"Sa Kahapon" by IV of Spades and Shanti Dope

Disco-rock and hip-hop elements meld successfully in "Sa Kahapon." New-generation talents IV of Spades and Shanti Dope break genre stereotypes and soar to new heights in this incredibly catchy collab number. The track, one about friendship between people from different worlds, balances two very different styles and equally shares the spotlight between both acts.

"Does She Know" by Kiana Valenciano and Curtismith

Kiana Valenciano's first collaborative effort with Curtismith has been an undeniable success when it first came out. With the release of “Does She Know,” Valenciano introduced her own brand of R&B. In the danceable track, Curtismith adds flair and delivers some sleek rhymes. Also check out their second collab titled, “Keep It Secret.”