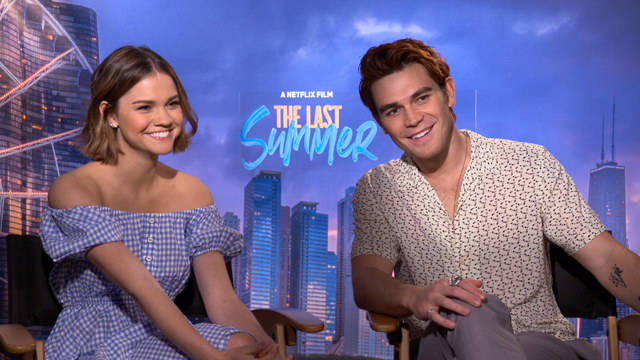 KJ Apa, Tyler Posey, and the rest of the cast talk about making their new movie.

(SPOT.ph) When you think of summer, what usually comes to mind is the unbearable heat and your upcoming beach vacation. But in Netflix's new romance flick The Last Summer, a group of graduating students see it as the last few days before the rest of their lives. They are, after all, moving to different colleges and going on their own different paths. So it's their last chance to party, get together, and tick things off of their bucket list that they've always wanted to do.

Griffin is a talented musician who's following his dad's dream for him to go to Columbia University. He's always had a crush on Phoebe, who's set on pursuing her filmmaking career in New York University. Ricky, on the other hand, is a rookie baseball player who's just moved into town and (quite literally) runs into the overachieving Erin. She's fresh from a breakup with her high school boyfriend Alec, who's helping out his best friend Foster get some action.

SPOT.ph got to catch up with the cast of the movie in Los Angeles and we got to ask them about making the movie together, what they love about it, and what they hope fans will pick up from it, too.

There are a lot of stories in the movie, but for Novogratz, his favorite is the one of Reece and Chad's—two outcasts who are trying to lose their virginity by pretending to be stock traders at a bar.

As for Posey, his favorite is Erin and Alec's. "I think it's really cute." Sage, agrees, saying, "It's a very genuine depiction of what love is like at that age. And it's confusing especially to be so young and to feel like you've found your person and to also feel like you're supposed to pull away from each other because you're moving to different cities."

Mitchell shares that her favorite story is Audrey's (Sosie Bacon), who is still trying to figure out which college is the best for her.

Given that the cast all play either couples or best friends, it's no surprise to find out that they all just bonded easily off-camera, too. "We all hung out a lot outside of filming," Sage shares. "We spend a lot of time together outside of set."

When asked what fans will enjoy about the film, Posey answers, "Everything." Novogratz says, "Every single character is relatable to any kind of kid at all ages. You know, people in the 80s or people who aren't even in high school yet are all gonna go through this experience." True enough, given that the movie covers all kinds of stories, you can expect to relate with at least one of them.

"It's just a fun and relatable film for everyone," Latimore agrees. He also brings up how people will remember having their first love in high school. "There's something here for everyone." Mitchell says, "I think everyone who watches it, no matter what stage they're at, they'll have something to take home."

As for what they hope fans will learn from the film, Sage sums it up perfectly, saying, "To love love."