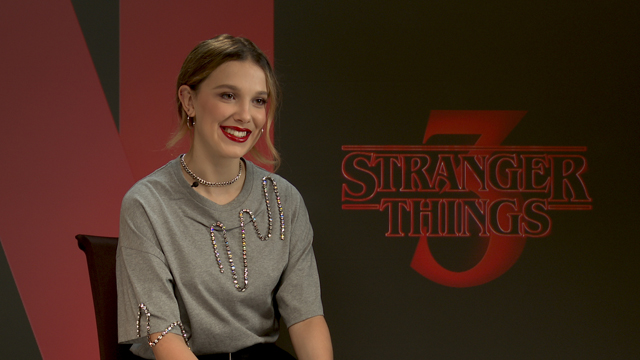 There's a lot to be excited about for the upcoming season!

(SPOT.ph) It's been three years since the Duffer Brothers introduced the eerie yet colorful world of Stranger Things to Netflix viewers. Apart from the intriguing new characters, the new storylines they brought, and all the heart-thumping fight scenes we saw in season two, the nostalgic soundtrack and visually stunning colors of the hit series are some of the things that fans loved about the season.

If you've been patiently waiting for Stranger Things 3 to hit your Netflix homepage, then we have a couple of things that may (or may not) tide you over—like this article on everything you need to know about the upcoming season and this cool Stranger Things-themed collection (Fun fact: it includes fashion pieces that make an appearance in season three!). To add to that, we even got to sit down with actress Millie Bobby Brown and talked about what we can expect in the upcoming season! Read on to find out what the kids' relationships are like now that they're teenagers, how El explores her own fashion sense, what fans will love about the new season, and more.

To start off our chat, we asked Brown what she loves most about playing El. "I love playing her vulnerable side. I think it's extremely important to portray the fact that she's still a teenager, still growing and evolving," she shares. "But I love the fact that she's so strong and powerful too."

Season two ended with a brewing romance between Mike (Finn Wolfhard) and El as well as Lucas (Caleb McLaughlin) and Max (Sadie Sink). "I love Lucas and Max," Brown shares. "They're such a good pair together. They're two [very] different people and I think that together they're so cute." When asked about what we can expect from Mike and El's relationship, Brown shares, "Mike and El are my favorite. Their relationship grows, just like it being a teenager. Their relationship grows with them and it's very cool."

Another exciting thing to look forward to in the new season is El discovering her own fashion sense. "She's always been told what to wear by Papa...by Hopper. It's never been her fashion sense," she says. "So this season, she definitely gets to explore that and there's definitely a makeover for El."

When asked about the group's dynamic, Brown shares that Sink is the "mom" of the group—the type of person who always has a Band-Aid with her. Sink plays Max, who joined the Stranger Things gang in season two. Brown also shared that Noah Schnapp, who plays Will, is the funniest kid in the group and that together, they're like two big babies and Sink is the one who calms both of them down.

To end our chat, Brown tells us what fans will love most about the upcoming season. "The music is amazing in season three. The colors are fantastic, too," Brown tells us. She continues, "But where we go in season three, the hangout spot is the coolest part of the season, I think."

Check out our full interview:

ADVERTISEMENT - CONTINUE READING BELOW
Your guide to thriving in
this strange new world.

Millie Bobby Brown Stranger Things 3 Stranger Things Netflix
Your Guide to Thriving in This Strange New World
Staying
In? What to watch, what to eat, and where to shop from home
OR
Heading
Out? What you need to know to stay safe when heading out