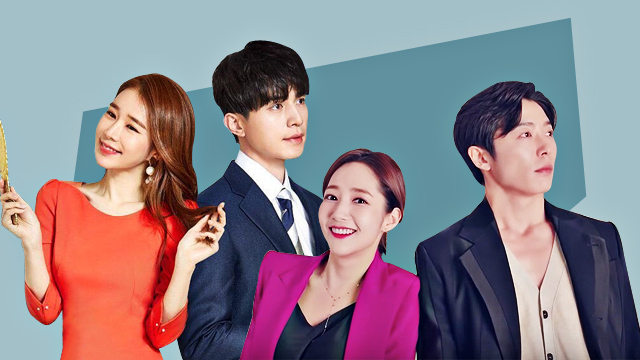 10 New K-Dramas You Should Have Seen by Now

(SPOT.ph) It’s been an exciting year for K-Drama fans so far. The genre continues to step up its game with every new offering, from rom-coms done with a twist to thrilling zombie action.

Now that we’re officially in the second half of the year, it’s a perfect time to look back at some of the best series that have graced our screens in 2019. And if this is your first foray into the world of Korean TV, you won’t regret watching any of these picks.

Here are the new Korean dramas to add to your binge-watch list:

Watch it on: Netflix
There’s a reason Sky Castle is the highest-rated drama in Korean cable TV history—besting even the likes of Goblin and Reply 1988! The story revolves around a group of families living in Sky Castle, an exclusive residential community for South Korea’s elite. For the parents, their children’s success is the ultimate prize and they'll take advantage of possible means—even if it means using each other—to win. Sky Castle was widely praised for its unflinching portrayal of South Korea’s controversial and highly competitive educational system.

Watch in on: Netflix
In this heartwarming coming-of-age drama, a group of friends all leave home for a variety of reasons and somehow end up living under one roof. Together, they navigate the challenging road of adulthood, experiencing everything from first love to first heartbreak, first jobs, first failures, and more. The show stars Ji Soo, Jin Young, Jung Chae Yeon, Kang Tae Oh, and Choi Ri.

Watch it on: Viu
K-Drama star Park Min Young continues to show off her versatility as an actress, this time as Deok Mi, a talented art curator by day, and an overly passionate K-Pop fansite manager by night. When rabid fans begin to suspect that Deok Mi is dating the idol she’s obsessed with, her new boss, Ryan (Kim Jae Wook) steps in to stop fans from harassing her. The rom-com was praised for its refreshing storyline and the chemistry between its two leads.

Watch it on: Viu
The famous second-lead couple from Goblin was so popular that it came as no surprise when it was announced that Lee Dong Wook and Yoo In Na would be starring in their own rom-com. The latter plays Yoon Seo, an actress known more for her beauty than her acting skills, whose career takes a turn for the worse when she gets involved in a scandal. When she finally gets a chance to turn things around with a new lead role as a lawyer’s secretary, she must immerse herself in a real-life law firm to learn the ropes.

Romance Is a Bonus Book

Watch it on: Netflix
For anyone who has ever worked in publishing, you’ll fall in love with this slice-of-life series starring K-Drama favorite Lee Jong Suk. The story centers on Dan Yi (Lee Na Young), a successful copywriter who suddenly loses her job. She learns that the new workforce is even tougher to break into: She’s too overqualified for smaller positions, and there are no open positions for someone at her level. In desperation, she gets hired at a publishing company by lying about her credentials—only to find that it’s headed by her childhood best friend.

Watch it on: Netflix
Combining juicy medieval politics with visceral horror is Netflix’s first Original K-Drama, Kingdom. If you’ve seen this show floating around your Facebook feed, we’re here to tell you that the hype is very real. Kingdom follows an embattled Crown Prince (Ju Ji Hoon) who goes on a suicide mission to uncover the circumstances behind a mysterious plague sweeping across the nation. Kingdom dares to rewrite tropes for both the K-Drama and the zombie genre, and is worth a watch even for those who have never seen a Korean drama before.

Watch it on: Viu
Now on its third season, Voice is a thrilling crime procedural drama that centers on Kwon Joo (Lee Ha Na), a tough police officer gifted with perfect auditory skills who works as a voice profiler. A brutal serial murder forces the police to create a special team to respond to emergency calls. This time, the series focuses on cases in the Internet’s dark web, and continues to be a ratings juggernaut even three years after the show’s first season.

Watch in on: Viu
Blending a crime thriller with romance and fantasy is tvN’s series starring Park Jinyoung (also known as a member of K-Pop boy group, GOT7). He plays Lee Ahn, who meets a tragic accident that gives him the ability to see a person’s past just by touching them. His path crosses with Jae In (Shin Ye Eun), a brilliant, aspiring prosecutor fascinated by her convicted father’s case.

Watch it on: Netflix
After charming audiences in 2017’s Strong Girl Bong Soon, Park Bo Young’s TV comeback combines a legal drama with fantasy and comedy. She plays Se Yeon, a beautiful and talented prosecutor who mysteriously dies on the job and is somehow reincarnated as an average-looking woman. Meanwhile, Cha Min (Ahn Hyo Seop) is a wealthy yet unattractive heir to a cosmetics empire; after dying in an accident, he is also reincarnated—but into a young and handsome man. The two start working together to uncover the mystery surrounding their deaths and revivals.

Watch it on: Viu
Set in the Joseon Dynasty period, Haechi follows four people from different walks of life. Lee Geum (Jung Il Woo) is a brilliant and ambitious prince who is underestimated because of his mother’s lowly stature, Yeo Ji (Go Ara) is a talented government officer whose skills are undermined because of her gender, Moon Soo (Kwon Yul) is a young and inexperienced boy with dreams of working in civil service, and Dal Moon (Park Hoon) is a famous entertainer with a gift for the martial arts. Together, they must work together to help the prince claim his throne and reform their government.