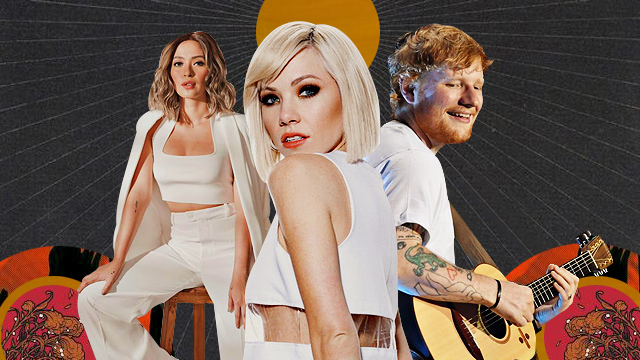 10 New Songs for Some Rainy-Day Sunshine

(SPOT.ph) It sure can dampen the spirit when the sky is overcast and the rain starts pouring. But there's nothing some lit music can't fix. This month, we recommend Carly Rae Jepsen's feels-loaded bop, Katy Perry's sentimental single, King Princess' chill ditty, Ed Sheeran and Justin Bieber's pop collab, and Mark Ronson and Camila Cabello's sultry release. For local acts, we suggest you hear what Markus, Inigo, Moophs, and Kyler, Joyce Pring and Rico Blanco, Issa Rodriguez, Brian Josef, and Dhruva Tara have to offer.

Here are new songs you should add to your rainy-day playlist:

Artist: Carly Rae Jepsen
Off her much-praised fourth studio album, Dedicated, the electro-pop tune "Too Much" will take you to synth heaven and conjure up all your feelings. The single starts with a slow and smooth groove, and then progresses into the signature dance-floor bop you can only expect from the underrated pop artist.
Fun fact: CRJ, known for her passion and knack for songwriting, reportedly wrote more or less 200 songs while working on Dedicated.

Artists: Markus, Iñigo, Moophs, and Kyler
"Beautiful" is the summer earworm you need to brighten up the rainy days. The fresh collab opens with an infectious piano-driven melody that will instantly get you hooked. The artists all get along as good friends, and it seems their good relationship is manifesting in just how sleek this track turned out.
Fun fact: DJ Moophs served as the producer, composer, writer, and mixing and mastering engineer of the single.

Artist: Katy Perry
Considered a comeback single for the pop diva, Katy Perry's "Never Really Over" takes listeners back to her glory days of soaring vocals and sentimental (but not painfully cheesy) lyrics. Produced by Zedd, the electro-pop offering features a danceable house beat and a catchy chorus worthy of playing on loop.
Fun fact: "Never Really Over" samples Norwegian singer Dagny's song "Love You Like That."

Artists: Joyce Pring and Rico Blanco
TV host Joyce Pring has teamed up with OPM veteran Rico Blanco to pursue her first love—music. "Baka Sakali," Pring's first original song, is a hopeless romantic's dream as it talks about giving love another shot after losing faith. In the relaxed electro tune, she sounds raw and sincere and shows promise.
Fun fact: The single was released on the eve of Pring's birthday.

Artist: Issa Rodriguez
If you haven't had the pleasure of hearing Issa Rodriguez's soulful vocals, now is the time. Her original single "Fragile," with its endearing acoustics, will knock on your hearts and remind you of one’s vulnerability when falling in love. This Mustard Music artist is one to watch.
Fun fact: Rodriguez describes herself as the "timid, quiet girl you see in a corner café writing down her tunes."

Artists: Ed Sheeran and Justin Bieber
The first single off Ed Sheeran’s forthcoming fourth studio album No.6 Collaborations Project opened at number one on the U.K. Singles Chart. "I Don't Care" is a feel-good love ditty with a goofy music video to boot. There was much anticipation from the teasers for the new single, and we can say these two top performers did not disappoint.
Fun fact: This is Sheeran's first new music in two years.

Artist: Brian Josef
Brian Josef is out with a catchy new single, not long after the release of his solo album titled Mood. "Don't Go" highlights the independent music producer's new wave, electronic, and pop music influences. It's the kind of jam you'll want to dance to in your room while it's pouring outside.
Fun fact: Brian Josef is also the vocalist and guitarist for the post-punk/garage band The Charmes.

Artists: Mark Ronson feat. Camila Cabello
Mark Ronson is out with another hit, this time in collaboration with former Fifth Harmony singer Camila Cabello. "Find U Again," off Ronson's upcoming Late Night Feelings album, is a shiny dance-floor anthem about yearning for lost love. It's sultry and somber at the same time, with Cabello effortlessly crooning through the synth-pop track.

Artist: Dhruva Tara
Electro-rock group Dhruva Tara is out with "Intro: Magkaibang Damdamin," a snappy, contemplative, and synth-heavy sonic composition that will entice you with its lush arrangement and lyricism. Listen to this while stuck in a downpour and be transported to another dimension.
Fun fact: Fredz Mantilla, Axel Vito Cruz, Chrisanthony Vinzons, Kid Guevarra, Gi Garcia, and Brian Lotho make up the band.