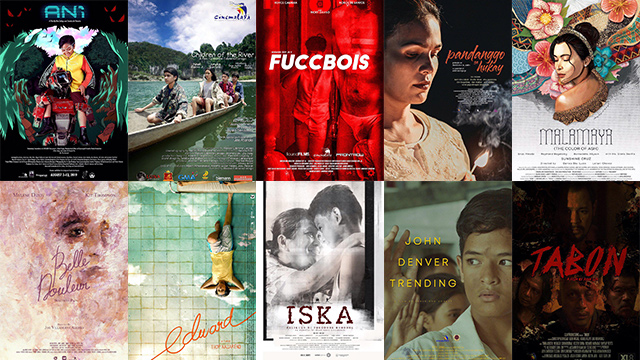 The SPOT.ph Guide to Cinemalaya 2019

Check out this year's entries!

(SPOT.ph) Fans of local independent cinema are in for a treat as Cinemalaya has just released the official lineup for this year's festival. The 2019 edition runs from August 2 to 13 in Greenbelt, Glorietta, Trinoma, UP Town Center, Market! Market!, Evia Lifestyle Center, and the Cultural Center of the Philippines. This year, you can look forward to 10 full-length films and 10 short films.

Here are the 10 feature films you can catch in the 2019 edition of Cinemalaya:

Directed by: Kim Zuñiga and Sandro del Rosario
Set in the future, a young orphaned boy (Zyren Dela Cruz) goes on a late-night adventure and encounters a malfunctioning robot while out on the farm.

Directed by: Maricel Cabrera-Cariaga
Four kids talk about their friendship by the river and engage in mindless squabble. The three of them wade in the river, and one boy stays put. His thoughts are later interrupted by a phone call.

Directed by: Joji V. Alonso
A single woman in her 40s (Mylene Dizon) is insistent on living alone for the rest of her days. That is until she meets a younger man (Kit Thompson) who shows interest in her home's antiques and breaks all her rules, setting her off on wild adventures.

Directed by: Thop Nazareno
A teenage boy who has been forced to live under the hospital bed of a sick father tries to live a normal life.

Directed by: Theodore Boborol
An impoverished grandmother (Ruby Ruiz) of an autistic child makes ends meet by being a photocopier at a university. Media coverage of her grandson twists her narrative, causing society to perceive her as something she is not.

Directed by: Arden Rod Condez
A young boy's (Jansen Magpusao) life changes when he goes viral for attacking a classmate who accused him of stealing an iPad. The film is based on true events and is shot entirely in Pandan, Antique.

Malamaya (The Color of Ash)

Directed by: Danica Sta. Lucia and Leilani Chavez
An uninspired middle-aged artist (Sunshine Cruz)—who believes men are all the same—crosses paths with a young photographer (Enzo Pineda) who wants to date her.

Directed by: Sheryl Rose M. Andes
A woman (Iza Calzado) dances the pandanggo beautifully but everything is not as bright and pretty as it seems.

Directed by: Xian Lim
Suspects are being hunted down and accused of killing a man, but the road to the truth is disillusioned and bloody.