Best Moments of Song Joong Ki and Song Hye Kyo in Descendants of the Sun
Loading
Already a member? Log in
No account yet? Create Account
Spot.ph is your one-stop urban lifestyle guide to the best of Manila. 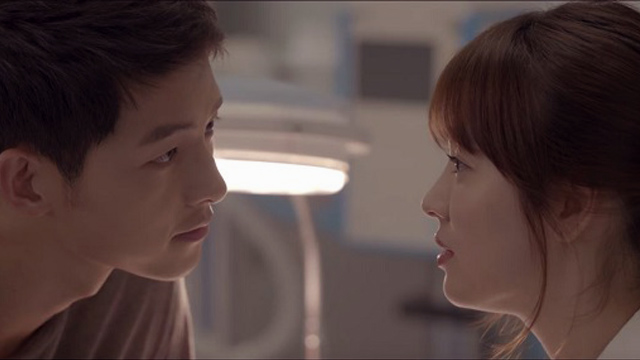 From the show where it all began.

(SPOT.ph) In case you missed it, Song Joong-ki  has filed for divorce from his wife, actress Song Hye-kyo. Also known as Song-Song couple or KiKyo, the pair met in 2016 and fell in love while filming the global K-Drama phenomenon, Descendants of the Sun. In the TV series, Joong-ki played Yoo Si-jin, the captain of a Special South Korean Special Forces unit who crossed paths with Kang Mo-yeon, a doctor (Song Hye-kyo), but work commitments prevented their relationship from developing. Eight months later, a medical assignment in war-torn Uruk reunited the two and allowed their relationship to thrive amid both gorgeous settings and high-stress scenarios.

The onscreen chemistry between the actors was so palpable that when the two broke the news in January 2017 that they had plans to tie the knot, fans of the show rejoiced. The Korean superstars got hitched in a well-attended private ceremony on October 31, 2017.

On June 27, Joong-ki took the first steps in filing for a divorce due to irreconcilable differences. He released an official statement, saying that he has "begun the process of filing for divorce from Song Hye Kyo," and hopes that "the divorce process can be wrapped up amicably."

Hours after, Song Hye-kyo released a statement through her agency,
United Artists Agency. A representative stated, “We find it unfortunate that we are greeting you with unhappy news. After careful consideration, actress Song Hye Kyo and her husband are taking the first steps toward a divorce," citing "personality differences" as the reason behind the decision.

Though their real-life love story has come to an end, their relationship onscreen will forever live on. Here are some of the best moments in the series that made millions of hearts skip a beat.

Mo-yeon ends up in possession of a stolen phone owned by Si-jin's colleague Dae-young (played by Jin Goo), after Mo-yeon unknowingly treated the phone thief. Si-jin calls Dae-young's phone while walking around the hospital and they stumble upon Mo-yeon, who thinks that Si-jin is a gangster boss when she sees the name registered on the phone—Big Boss, which is actually his military call sign.

Who could forget that phone flip-slash-perfect catch by Si-jin when Mo-yeon attempts to call the police? We say it's the first time Mo-yeon looked at Si-jin differently.

When Si-jin called Mo-yeon beautiful even without makeup

A tired Mo-yeon heads home after her shift at the hospital—awkwardly stretching and yawning—only to be greeted by Si-jin who is apparently two hours early for their date, saying he did it intentionally because "it was pretty nice to have someone to wait for." He then reassures Mo-yeon that she looks beautiful even with no makeup.

Towards the end of episode 5, Mo-yeon offers Si-jin a bottle of wine. Instead of taking her offer, Si-jin approaches her and leans in for a kiss. Fans have since dubbed this scene as the "Wine Kiss."

An earthquake has hit and both Si-jin and Mo-yeon are part of disaster relief efforts. Mo-yeon stops to tie her shoelaces, when suddenly, Si-jin appears out of nowhere and ties her laces. After a long moment of silence, she tells her to take care, and walks away. There weren't many lines exchanged in this scene, but one could feel the intensity amid the silence.

Si-jin accidentally hears Mo-yeon's recorded confession that she made in episode 5, where the car she was driving accidentally goes off a cliff (of course, Big Boss came to her rescue). In a state of panic, she recorded several messages in case she wouldn't make it. One of the messages was a confession intended for Si-jin, where she admits that she was "kissed by an awesome man" and that her "heart was fluttering the whole time." Mo-yeon hears her confession blaring from across the base, and tries to stop it from playing—except that she had to face Si-jin with a knowing smile across his face.

Mo-yeon takes care of an injured Si-jin as his "girlfriend," in reference to the fact that she is a doctor by profession. As they discuss going back to Uruk together, Si-jin—who's in a wheelchair—makes her listen to a favorite, which happens to be an audio clip of her confession. This startles Mo-yeon and accidentally sends Si-jin down the hill. Mo-yeon hurriedly rushes to his direction, but she goes past Si-jin and checks the condition of the wheelchair first, which she says is expensive.

The "Ghost" of Si-jin

Si-jin and Mo-yeon reunite in the final episode, which coincides with Si-jin's "death anniversary." Mo-young has prepared food for his memorial and makes a video call to her friends at the hospital, who get the shock of their lives when they see Si-jin in the background, thinking they're seeing a ghost.

Si-jin and Mo-yeon finally make it to their planned Uruk trip together. In true K-Drama fashion, they exchange "I love yous" in the end and kiss.