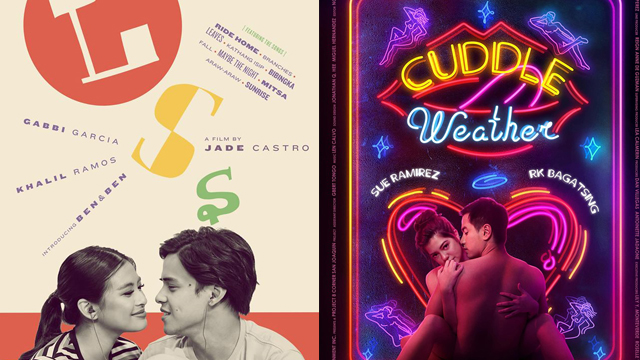 Don't miss out on these local films!

(SPOT.ph) Local films often have to compete with foreign movies for screening time at the big cinemas, but there are two special times each year when they're the main event. One instance would be the Metro Manila Film Festival, annually held at Christmastime, and the other would be the Pista ng Pelikulang Pilipino, happening this year from September 13 to 19. You can watch seven feature films and three other films that are part of the PPP Sandaan Showcase in cinemas nationwide. If you're eager to catch all the films but don't know which entries made it to the line-up, we've rounded them up for you.

Here are the feature films at Pista ng Pelikulang Pilipino 2019:

Sara (Gabbi Garcia) dreams of becoming a full-time musician but is convinced by others to just make it a hobby. Zak, played by Khalil Ramos, encourages her and pushes her to achieve her dreams anyway. They follow an up-and-coming band played by nine-piece indie-folk band Ben&Ben and together, they get caught in situations that make them reevaluate their best-friends-only status. The film is directed by Jade Castro and produced by Globe Studios in association with Dokimos Media Studios Inc. and Ben&Ben.

Adela Johnson, played by Sue Ramirez, has aspirations of becoming the best prostitute in town. Ram (RK Bagatsing), on the other hand, is a seaman back in Manila and wanting to be part of Makati's red light district in order to make ends meet. They hook up constantly to tutor each other to become the best prostitutes they can be and rake in good money from the richest clients. It's all fun and games until feelings get involved. The film is directed by Rod Marmol under Regal Entertainment.

Directed by Jun Lana (Die Beautiful), the film follows three gay sisters (Paolo Ballesteros, Christian Bables, and Martin Del Rosario) and their shenanigans. Everything comes to a halt when their terminally ill and distant father makes a deal they can't refuse: a granchild in exchange for the family wealth. The film is a produced by The Idefirst Comapny, Black Sheep Productions, and ALV Films.

An assassin (Jean Garcia) is in the middle of a kill but hesitates upon finding out that her target is in the company of a young girl. When she finally completes her mission, she lets the girl flee safely, but eventually takes her in and watches over her. As she takes on killing jobs with the little girl in tow, she begins to question her purpose. The film is directed by T.A. Acierto under Cinebandit Productions.

Starring Maris Racal and Iñigo Pascual, the film follows Ellenya, a girl who—like most millennials—lives her life on social media, with her self-worth tied to the number of likes, shares, and posts she racks up. Wanting to become a big social media influencer and vlogger, she creates a persona in the hopes of getting her foot in the door. The film is directed by Boy 2 Quizon and is produced by Spring Films, N2 Productions, and Cobalt Entertainment.

Long-time lovers Rome (Arci Muñoz)and Ethan (JC Santos) have found that what was once familiar and comfortable can become very stale. In an effort to spice up their partnership without breaking up, they decide to open their relationship to other parties. The film is produced by T-Rex Entertainment with Black Sheep Productions and is directed by Andoy Ranay.

Starring Mccoy De Leon, Jameson Blake, Paulo Angeles, and Mark Oblea, the film centers around one barkada's adventures, which make them realize the value of family, friendship, love, and life. The film is directed by Dondon Santos under Cineko Productions.

You can also catch the following films under the PPP Sandaan Showcase:

Co-directed by Hubert Tibi and Maria S. Ranillo, and introducing Vince Ranillo, the film tackles the problems an overseas Filipino worker faces as he returns to the family he left behind in his home country.

The film narrates the life of Lola Igna, a foul-mouthed and stubborn old woman who is eager to die, but is held back by her neighbors so she can achieve the title of oldest living grandmother in the world. Her great-great-grandson, Tim, an aspiring vlogger, reconnects with her to document her new-found fame...and gives her a new reason to hold onto life. The film is directed by Eduardo Roy Jr. under ERT Productions and EMBA, Inc.

Directed by Adolfo Borinaga Jr., the film stars Anita Linda as Doña Atang, an established and once-celebrated film producer from the early years of Filipino cinema. For her final wish, she hopes to gather all the staff and actors she has worked with in the past for a reunion. As her grandson Michael (Enchong Dee) goes on a journey to find them, viewers get a glimpse of Philippine cinema's colorful history captured through faded but powerful memories. The late Eddie Garcia also has a special part in the film.

UPDATE (September 2, 2 p.m.): This article was updated to include the updated trailers for the PPP entries.

Ppp Pista Ng Pelikulang Pilipino 2019 Pista Ng Pelikulang Pilipino Cuddle Weather Lss Panti Sisters G! Open I'm Ellenya L. Watch Me Kill Pagbalik Circa Lola Igna Local Films Pinoy Films Film Festival
Your Guide to Thriving in This Strange New World
Staying
In? What to watch, what to eat, and where to shop from home
OR
Heading
Out? What you need to know to stay safe when heading out