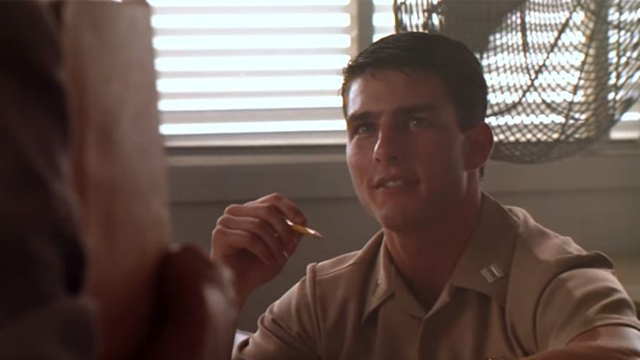 We dug up some of the most unforgettable scenes from Top Gun: Maverick's predecessor.

(SPOT.ph) The trailer for Top Gun: Maverick made quite a splash at San Diego Comic-Con this week, with Tom Cruise himself making a surprise appearance on July 18 to give fans a sneak peek of the movie. Starring Cruise along with Miles Teller, Jennifer Connelly, Jon Hamm, Val Kilmer, and more, Top Gun: Maverick won’t be out in theaters until June 2020, but that gives you enough time to check out the OG—Top Gun.

Released on May 12, 1986, Top Gun revolves around a school established by the U.S. Navy for its best pilots—the top one percent, specifically—to train them in aerial combat. Officially, it was called Fighter Weapons School. Pilots called it Top Gun. The movie went on to become the top-grossing film of 1986, earning over U.S. $176 million, and made Tom Cruise a star. But what made it so cool, really?

We look back on some of the most unforgettable scenes from the OG Top Gun:

There are plenty of fast-paced aerial combat scenes in Top Gun, but this one stands out for its perfect mix of adrenaline-pumping action and humor. The sequence has Maverick (Tom Cruise) and his co-pilot Goose (Anthony Edwards) trying to help another U.S. fighter plane shake off an unidentified MiG-28 jet, and pulling off an impossible maneuver to do it.

The pilots hit up a bar during their off-time, and Maverick spots a beautiful blonde. Of course, aside from being an excellent co-pilot, Goose is also an ever-reliable wingman, so they launch into a rousing version of The Righteous Brothers’ classic “You’ve Lost That Lovin' Feeling” to grab her attention. Maverick finds out just enough about her before her date arrives.

It’s the day after Maverick crashed and burned with the blonde at the bar, and he discovers that he’ll be seeing more of her after all.

It’s a bunch of fighter pilots playing beach volleyball. Topless. Maybe this scene made the cut because they knew it would help draw a female audience?

He’s just shown off his fighter-pilot skills yet again, so naturally Maverick requests to fly by the control tower. He doesn’t get the go-signal, but that just makes this more fun to watch.

Got more unforgettable scenes to add? Fire away!