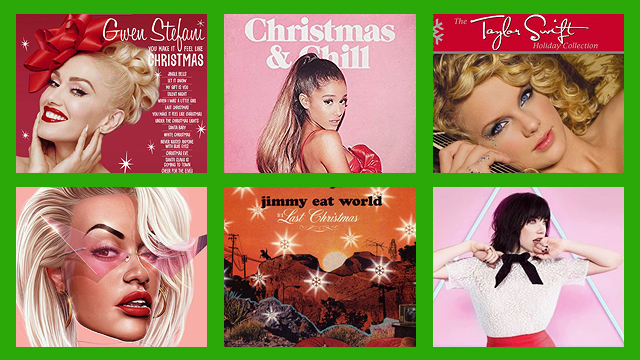 Top 10 "Last Christmas" Covers to Save You From Tears

Which version of this hit Christmas pop song is your favorite?

(SPOT.ph) The melancholic yet upbeat "Last Christmas" is a holiday playlist staple for good reason. It sounds jangly and jolly, but it also resonates with those who may be heartbroken this holiday season. Originally released in December 1984 by English pop duo Wham! (George Michael and Andrew Ridgeley), various artists have covered the hit song and injected their own style and flavor into the track. Got no S.O. to cozy up with these -ber months? Fret not. We've got 10 of the best "Last Christmas" covers to keep you company.

Here are the best covers of "Last Christmas":

One of the earlier covers of "Last Christmas," this Whigfield version is pure '90s pop. The arrangement stays close to the original but has an old-school character of its own. Both danceable and emotional, this rendition will get you moving but also reminiscing warmer Christmases.

First released in 2009 and then in 2010 as part of Glee: The Music, The Christmas Album, this "Last Christmas" version features the ace vocals of our favorite Gleeks. Lea Michele and Cory Monteith take the lead here, and their duet will give you all the feels while keeping things cheery.

Jimmy Eat World's "Last Christmas" version is a pop-punk gem that adds edginess to the track. Alternative-music fans will find this to be the cover that's best for them. The band's signature sound is very much present in the track, which gives it a totally new feel while still respecting the original.

Released as part of The Taylor Swift Holiday Collection, this version features Swift's original country-pop sound. If you have been missing her earlier style and just love the way she sings about heartbreak, this "Last Christmas" version is for you. Her take on the '80s classic is a bit more upbeat and features some notable guitar sounds.

Part of My Christmas Album All Stars released by MCA Music, Inc., local act Urbandub's cover of "Last Christmas" adds a kickass rock element to the original. Gabby Alipe's emotive vocals are tempered by the groovy guitars, which keep the balance between the track's mushiness and coolness.

Rita Ora's cover of "Last Christmas" for BBC Radio 1 Live Lounge doesn't experiment much with the arrangement, but she does showcase some pretty solid vocals here, which highlights the heartbreaking message of the song even more. The slight rasp in her voice and the cool backing vocals make it an overall pleasant tune.

You Make It Feel Like Christmas, Gwen Stefani's fourth studio album and first full-length Christmas-themed record, includes a slower version of "Last Christmas." Known for her unique vocals, Stefani provides a sleek twist to the classic Christmas anthem. There's something about her voice that just makes us so emotional but soothes our heart all at the same time.

Not long ago, Robyn blessed us with her live performance of the Wham! original. Her slow acoustic rendition of "Last Christmas" is a pure and moving reminder of the song's message as well as Robyn's undeniable talent. She croons her way through the thoughtful lyrics and creates a more poignant experience for all of us.

Ariana Grande took the original and just had fun with it. The result? A catchy and bouncy "Last Christmas" cover that includes her pop, R&B, and soul influences. For this version, which is the lead single off Grande's Christmas Kisses record, the pop diva keeps the chorus and sings her own verses. She manages to pay homage to the OG version while keeping it fresh and 100% her.

Carly Rae Jepsen gets major props for her creative and extremely charming take on "Last Christmas." The underrated pop star incorporates her unique '80s-inspired bubblegum-pop, synth-heavy sound into the track to create something that's entirely her own. The playful opening is enough to tell you right away that this is not a mere copycat production.

Songs Last Christmas Top 10 Carly Rae Jepsen Ariana Grande Taylor Swift Urbandub Robyn Jimmy Eat World Rita Ora Gwen Stefani Glee Whigfield Christmas Playlist Evergreen
Your Guide to Thriving in This Strange New World
Staying
In? What to watch, what to eat, and where to shop from home
OR
Heading
Out? What you need to know to stay safe when heading out