10 Types of Moviegoers You Can Find While Watching a Horror Movie
Loading
Already a member? Log in
No account yet? Create Account
Spot.ph is your one-stop urban lifestyle guide to the best of Manila. 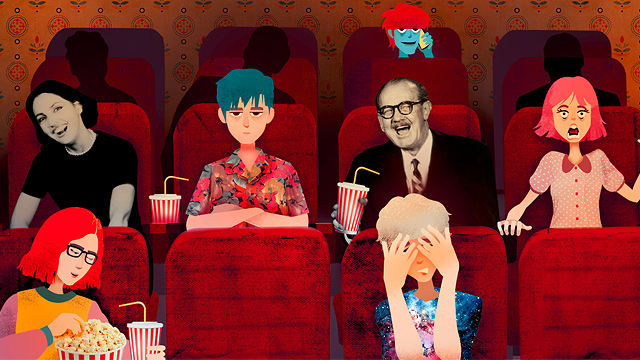 The 10 People You Meet While Watching a Horror Movie

Where's the fun in watching a horror flick alone?

(SPOT.ph) There's no one true way to prepare yourself for watching a horror movie on the big screen, but it pays to have a companion and snacks to make the experience better. You'll have your fair share of screams and scares, and so will the other viewers. Unfortunately, some could rub you the wrong way, while some may hold their ground better than you do. Either way, you'll see them in the cinema. We round up the 10 types of moviegoers you'll spot at a horror-film screening.

Here are the 10 types of people you encounter in the cinema while watching a horror flick:

This type of moviegoer knows how scared they can get and yet somehow decides that watching a suspense thriller is a good idea. Sure, they paid for the movie ticket, but they’d much rather cover their eyes the entire time to shield themselves from the next scary scene or bloody sequence. We’re not sure if they even know what’s going on, but at least they’re aware of what they can and can’t handle.

Much like the Mask who’s very afraid, the Screamer is, too—except this type of moviegoer releases tension by screaming. Some scenes might not even be that scary, but the Screamer will yelp at every slammed door or jump cut. If you’re seated next to this type, you might want to soothe your ears with some silence after the film.

Closely related to the Screamer is the Swearer. Instead of shouting from the stress, this moviegoer does unleashes a string of profanities at top volume. Admit it: you totally get the appeal of yelling "FUCK!" at the top of your lungs when a gory face appears out of nowhere.

Some of us need people to hold on to while watching a horror film, and the Protectors are there to save the day, at least while inside the cinema. They are seemingly not that terrified and don’t scream as much—they can be your go-to source of strength to finish the movie. Caution: Holding on to them too tightly could cause serious injury.

Horror films are meant to elicit a reaction, but the Rock shows none. No one knows if they’re scared and just hiding it or they’re genuinely unaffected, but regardless of how they really feel, you have to give them props for their stiff upper lip.

This moviegoer has either seen several horror movies, or read the film’s summary beforehand and is trying to "warn" their companions. Either way, the Clairvoyant puts in the effort to predict what’s going to happen next. Sometimes it can prevent awfully terrifying images from getting into your head, but sometimes they can just get excessively chatty or annoying.

This type of moviegoer takes it to another level by directing the characters in the film. If only they could be part of the film itself so they could save everyone from the perils of demons and the dangers of haunted houses. They're experts on everything about surviving and brag that they would be the only one to make it out alive—if this film were real. We get it, we get it—you won’t be the first to die.

Popcorn is a movie-watching essential, but to the Snacker, it’s what movies are all about—even if it's a horror flick. Their eyes may be glued to the screen, but they're more invested in chewing away at their big bucket of popcorn. Some may scream as a natural reaction to shocking scenes, but we suppose eating is a way to manage stress, too.

Fear is such an overrated thing, and nothing seems to impress for this type of moviegoer. They’ll go on about how the plot twist wasn't properly set up for maximum effect, or how predictable the characters were written. Worse, they'll say the elaborate make-up and prosthetics weren't really believable and is most likely CGI. That, or the music didn't do its job of giving them the chills. They do an awful good job of pretending like it isn't a big deal, but we're willing to bet they still got scared.

Looking at your phone in the middle of a movie is almost forgivable if you do it once or twice, but it's another story when someone carries on an entire conversation in a group chat while the movie's still playing. Maybe they’re just waiting for an important e-mail, or maybe they’re just using their phone as an excuse to not fully watch the film because they got forced to join the group. But don't judge them so easily—they might just be using their smartphone as a front to divert their attention...away from the terrifying creature making a mad dash towards the screen.