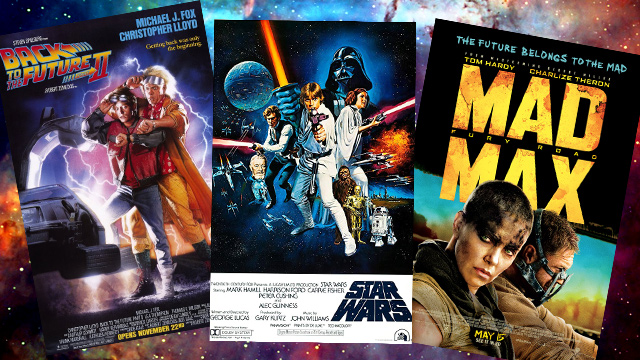 10 Most Memorable Sci-Fi Movies About the Future

Or at least, the past's future.

(SPOT.ph) Flying cars, sentient machines, cyberpunk being the go-to house décor—these are the things films predicted would be the future. It’s now 2019, and we’re not exactly at that level yet, but that hasn’t stopped cinema from dreaming what our future could be like. Some think of it as a cool place with technology so advanced, some envision humans already trying to live in space, and some see the future as a time where society collapses. What’s exciting about futuristic sci-fi films are the worlds that they create, the stories they generate, and the characters that populate the world. We’ve compiled 10 of the most must-see futuristic films so far. While some of these sci-fi movies set their future to this year, at the time of release, they had a very different outlook on what the world would’ve looked like.

Here are 10 sci-fi movies to watch:

The Planet of the Apes franchise goes all the way back to the 1960s. Its original incarnation, with a screenplay co-written by Twilight Zone’s Rod Serling, is considered a classic, and reboots shortly followed. After the 2001 Tim Burton remake left a lot to be desired creatively, director Rupert Wyatt took on the challenge in 2011 to reboot this story about a future where apes develop more human-like qualities and cause an uprising of the human race and take over. This time around, it’s an empathetic and charismatic ape named Caesar (played by mo-cap genius Andy Serkis) who takes the lead, resulting in a visually spectacular and surprisingly moving film that launched two just as impressive sequels.

What if it's Groundhog Day but futuristic? It seems a disservice to the thrilling and super fun Edge of Tomorrow to narrow it down to that question, but it’s the easiest way of explaining this action-packed sci-fi film about a future where an alien race has taken over parts of the world, and a man with the strange gift of being able to replay the day over and over to find out how to defeat the aliens. Tom Cruise has rarely ever been more entertaining as an actor in this film, and how he grows from a cowardly, inexperienced man in a suit to a skilled hero in a mech-suit is a marvel to watch. But, it is the awesome, alien-slaying Full Metal Bitch Rita Vrataski, played by a jacked Emily Blunt, that makes you wish you were fighting in this future alongside her.

A groundbreaking anime turned cult favorite, Akira made the post-apocalypse look cool with motorcycles, telekinesis, and all its cyberpunk goodness. Set in 2019 Neo-Tokyo after a singularity destroys Tokyo, this Japanese anime popularized cyberpunk, Japanese animated cinema around the world, and animation for adults, among others. Not only is it a thrilling sci-fi film about people with powers that can wipe out entire cities, it’s also a landmark film in many ways. In Akira, a bike gang leader tries to stop his friend who has gained telekinetic powers. Thor: Ragnarok director Taika Waititi was said to be working on a live-action adaptation, but only the future knows if that will ever come to pass.

Any Mad Max film could really fit the bill here, as this franchise set in a desert in the dystopian future about a policeman named Max trying to keep the peace in an ever-collapsing world is great all around. However, it is George Miller’s reboot of his own previous works that garnered worldwide critical and commercial acclaim, earning over U.S. $370 million all over the world and winning six Oscars. Taking place in a future where civilization has collapsed, Max (Tom Hardy) teams up with Imperator Furiosa (a phenomenal Charlize Theron) to take down the tyrannical leader Immortan Joe in a high-speed chase through the desert wasteland.

In 1982, the year 2019 seemed so far away, and with the rise of technology, anything could be possible. Now that it’s 2019, it’s clear that we are not anywhere close to synthetic humans being an actual thing, but that doesn’t make Blade Runner any less important. Ridley Scott’s beloved neo-noir sci-fi masterpiece, loosely based on Philip K. Dick’s novel Do Androids Dream of Electric Sheep?, is best known for its dark, techno-heavy Los Angeles and its protagonist Rick Deckard, played by Harrison Ford. Deckard is a “blade runner” tasked to take down “replicants” or synthetic humans. This dreamed-up future back in the '80s may not be our present, but it’s still a fascinating film with heavy themes and stunning visuals.

The Matrix sets up a pretty depressing future, where humans are unknowingly trapped inside a simulated reality called the Matrix by artificial beings who use human bodies as an energy source. When a hacker discovers this, he becomes embroiled in a war against the machines. Revitalizing the futuristic sci-fi movie, The Matrix instantly became a pop-culture phenomenon with its epic action sequences that borrowed from martial arts films, its complex but engaging and unique story, and its insanely good visual effects, which included the famous “bullet time” shots. With a fourth film on the way, it’s exciting to see what future the Wachowskis have in store, but let’s not forget that it was The Matrix that really made everyone’s current favorite action star Keanu Reeves “The One.”

Ridley Scott broke into the commercial space with Alien, a sci-fi horror thriller that still holds up 40 years later. It’s a simple set-up: a crew on a spaceship square off with a vicious alien who doesn't come in peace as it boards the ship. Terrifying, brutal, but exciting and jaw-dropping, Scott’s Alien was a critical and commercial success. H.R. Giger’s designs of the alien creature are legendary, and so is Sigourney Weaver’s badass heroine, Ellen Ripley. Androids, aliens bursting out of chests, and facehugging creatures are just some of the memorable scenes Alien put in pop culture. The first sequel, Aliens by James Cameron, is also worth noting.

A long time ago, in a galaxy the same as ours, George Lucas created Star Wars. Full of incredible visual effects, memorable characters, exciting action sequences, and lightsabers, Star Wars absolutely changed the game for sci-fi and futuristic films in Hollywood. No longer was sci-fi a dorky subgenre, it was the cool thing to do. Forty-two years later, seven prequel/sequels with an eighth on the way, and tons of spin-offs, merchandise, games, and more, Star Wars continues to be a phenomenal piece of film, and a super popular franchise. Set in a futuristic space where rebels are waging war against the evil Empire, Star Wars becomes a game of intrigue, lightsaber fights, and space chases that feature characters, whom to this day, continue to be some of the most popular, including Darth Vader, Luke Skywalker, Princess Leia, and Han Solo. There have been roadblocks along the way as it continued to grow, but there’s no reason to think Star Wars isn’t one of the most influential sci-fi films of all time.

In the first film, Robert Zemeckis takes his protagonist Marty McFly (Michael J. Fox) 30 years into the past. It only made sense that the sequel to this incredibly popular film takes Marty 30 years into the future—to 2015. Okay, so we’re way past that year now, but at the time, the “future” was a long ways away. This time-travelling sci-fi comedy was a huge hit and had a pretty cool future, with its DeLorean, its hoverboard, and its self-tying sneakers. While those things don’t actually exist, it’s unique to see a film go to the future and not have it be some sad, dark wasteland (even if Part II plays with post-apocalyptic themes as well).

Stanley Kubrick’s legendary and epic tale of artificial intelligence and existentialism may not be the most action-packed or the most fun, but 2001: A Space Odyssey launched futuristic sci-fi film into cinematic orbit. This influential film, considered one of the very best in cinema, melded together artsy and brainy science fiction with mainstream cinematic visuals—some of which are replicated until today. At the time, the cinematography, the style, and the focus was almost unheard of in mainstream film, but Kubrick made it work. Sentient computer HAL, one of the most famous movie villains, squares off with spaceship pilots and doctors, leading to one of the most popular man vs. machine tales in history. 2001: A Space Odyssey dared to tackle futuristic and sci-fi themes that no one else had, and made space and its future possibilities interesting to many before man even walked on the moon.