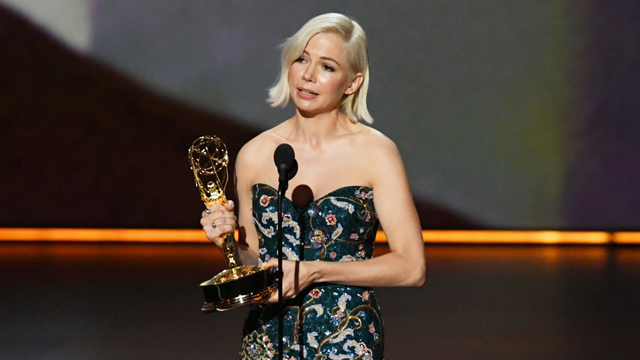 Michelle Williams, Patricia Arquette, and other actors spoke out.

(SPOT.ph) The annual Emmy Awards is Hollywood's annual celebration of the best and brightest on television, and while it has you rooting for your faves, it's also a time for artists, actors, and production folks to talk about their work and express their thanks. The ideal speech is short, witty, and manages to mention loved ones and colleagues all in one go, but these days, there's another element that helps make a thank-you more memorable—an advocacy.

Here's how some actors made statements during the 2019 Emmy Awards:

After having just won Lead Actress in a Drama, Fosse/Verdon star Michelle Williams used her speech to talk about the wage gap between men and women, and especially women of color. She went on to express her thanks to FX and Fox 21 for paying her equally, but acknowledged that not every woman can speak up and demand equal pay. Her speech follows the #NotWorthLess movement sparked by Crazy Rich Asians writer Adele Lim who left the project due to being paid less than her male co-writer. The hashtag catalogues the woes of women in the entertainment business about not being paid enough. Williams won big but she claims that "there really won't be any satisfaction for me until the larger message is heard, and that's what I wanted to point out tonight."

The actress won for her supporting role as Dede Blanchard in The Act and conveyed her gratefulness for being able to do this and live her best life. As she gave her speech, she couldn't help but talk about her sister Alexis Arquette, a transgender actress who died in 2016 at 47. She used her time to talk about how the world should be more accepting of transgender people: "I'm in mourning every day of my life, Alexis, and I will be for the rest of my life for you until we change the world so trans people are not persecuted. And give them jobs. They're human beings, let’s get rid of this bias we have everywhere."

Jharrel Jerome played Korey Wise in When They See Us and won the Emmy Award for Outstanding Lead Actor in a Limited Series or Movie for his performance. The miniseries narrates the story of the Central Park Five—five black and Latino Harlem boys between the ages of 14 and 16 who, in 1989, were falsely convicted for the rape of an investment banker who was attacked during her evening jog in Central Park. Jerome and used his acceptance speech to thank the Raymond Santana, Yusef Salaam, Antron McCray, and Wise, who were present at the awards show for their willingness to tell their story despite all the pain, the same story that led to Jerome's win. Jerome is also the first Afro-Latino to win an Emmy.

The Marvelous Mrs. Maisel star Alex Borstein won an Emmy for Supporting Actress in a Drama Series and took her time to pay tribute to her grandmother, a Holocaust survivor. "My grandmother was in line to be shot into a pit. She said, ‘What happens if I step out of line?' He said, 'I don't have the heart to shoot you, but somebody will,' and she stepped out of line. For that, I am here and my children are here," she shares. She highlighted her grandmother's bravery and encouraged ladies to step out of line.

Billy Porter bagged Lead Actor in a Drama Series for his performance in Pose. He is the first openly gay person of color to win an Emmy for the category, and while he was excited for his first Emmy, he took the time to shed light on how difficult it has been for the LGBTQ+ community to be recognized and acknowledged. He thanked series co-creator Ryan Murphy with some very powerful words: "I have the right, you have the right, we all have the right."

Transgender actress Laverne Cox used fashion to make a statement—she brought a rainbow clutch that says "Oct 8, Title VII, Supreme Court" to raise awareness on U.S. President Donald Trump asking the Supreme Court to make it legal to fire workers if they're part of the LGBTQ+ community. It is a call for people to show up and protest on October 8.