In Conversation with Insatiable's Gloria Diaz, Debby Ryan, and Robert Dallas
Loading
Already a member? Log in
No account yet? Create Account
Spot.ph is your one-stop urban lifestyle guide to the best of Manila. 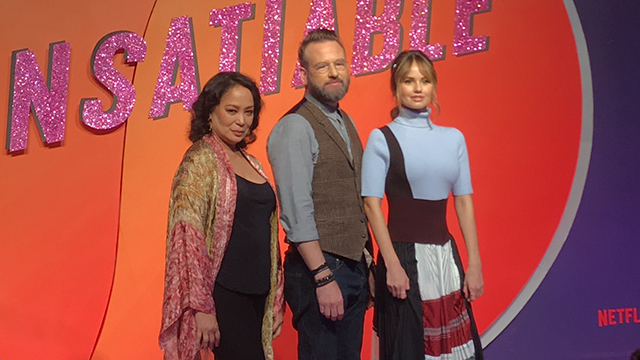 Gloria Diaz, Debby Ryan, and Dallas Roberts talk about queens being in control.

(SPOT.ph) Life is dramatic as is, but pageant queens go through more drama behind the scenes just to wear the perfect dress and master that walk to win the crown. Netflix series Insatiable starring Debby Ryan and Dallas Roberts follows the journey of pageant candidate Patty Bladell learning the ropes under the guidance of Bob Armstrong. Season two of the series introduces Gloria Reyes, played by the Philippines' own Gloria Diaz, and there's no telling what'll happen next! The stars sat down for a conversation at Shangri-La at the Fort on October 8 and talked about filming on set and what to expect for the new season.

Before anything else, how exactly did Diaz get cast? She got a message on Viber. "I thought it was a mistake," she shares. Not really knowing what Insatiable was yet at that time, she asked her kids, and just sent a message saying "Okay," to confirm that she was onboard. Her kids, nieces, and nephews were also the first to know about her casting.

"[The Insatiable cast and crew] are very nice and welcoming," she says, and has had a great time working with Ryan and Roberts. However, she admits that the nicer they are, the more pressured she is to do well.

The first season dealt with Patty's bad decisions, which Ryan thinks is "easy to watch, and you're encouraging her to do the right thing because she knows better." Roberts agrees that the characters' unpredictability leaves viewers blind each time, not knowing what to expect. Diaz says, "you're glued to it, and you keep watching," and the same twists and turns can be found in the second season.

The overarching theme for the second season is "Queens take control," and Roberts mentions how he works with a strong cast and crew of women who embody this on set and every day: "Queens don't ask for permission for control and queens don't wait for control." Diaz, on the other hand, shares an anecdote from the pageant world: "Winners get to decide, like where or what to eat; I order inihaw na baboy and everyone else orders quinoa," she recalls with a chuckle. She notes, with a cheeky tone, that queens are winners, and they get to call the shots. Ryan relates it to her character Patty, and how her bad decisions in the first season have harmed people negatively, and she must now put in the effort to correct everything. In this aspect, Patty must take control and fix her mistakes.

Ryan briefly talks about how the character of Diaz guides Patty and tells fans to look forward to how their characters will interact and help one another. Ryan didn't spill too much, but she did hint at Patty learning how to be a better pageant candidate—and a better person.

Check out the trailer for season two:

The second season of Insatiable starts streaming October 11 on Netflix.