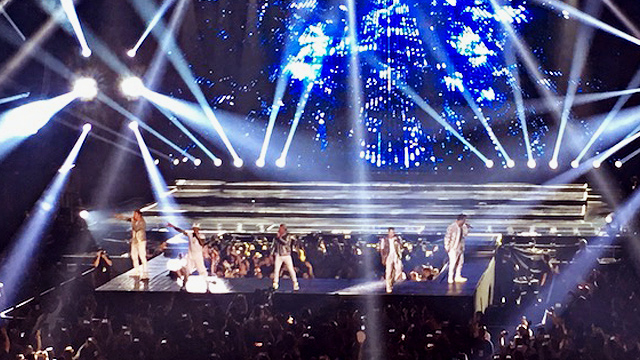 Best in Show: The Backstreet Boys Are Still Larger Than Life

Their DNA World Tour shows they'll keep going--as long as we love them.

(SPOT.ph) 26 years on and it’s safe to say that Brian Littrell, Kevin Richardson, AJ McLean, Nick Carter, and Howie Dorough have still got it. Unlike many artists of yesteryear, they’re not just looking to make a comeback—they’re here to show the world they never really left.

Their new album, DNA, makes it evident that the Backstreet Boys aren’t out to mimic any of the newer artists; nor are they clinging too tightly to a more favorable chapter of their collective history. Leave coasting on past successes in 2019, folks—it’s not a good look.

Opening and closing with songs dedicated to their crew and fan base—“Everyone” and “Larger Than Life,” respectively—is typical of the group, conveying an unwavering gratitude. But for the fans in particular, there was an ultra-specific sort of thank-you note.

In the middle of the set, each member of the group took the time to thank the Manila audience for their support over the years, “…and for taking the time to come out and see us,” as Kevin put it.

And did we ever see them.

“Do you remember, ladies,” continued AJ, peeking over a divider, “Back in the day, when you would throw the bras and panties at the stage? Tonight, Kevin and I would to return the favor.”

You can only imagine the screaming when pieces of their outfits went flying from the stage. (Can you blame us?)

The setlist as a whole was clearly well-planned. All the old hits (“Get Down,” “Quit Playing Games with My Heart,” etc.) still hold up, while slightly lesser-known tunes like “More Than That” and “Get Another Boyfriend” also endeared themselves to the crowd; so much so that some were wondering how they knew the words as they gleefully sang along.

Normally, new songs juxtaposed with nostalgic numbers don’t do well—but again, somehow, Backstreet maintains their sound while showing they’ve definitely grown up. “Don’t Go Breaking My Heart” is both upbeat and emotional, while “Chances” has a very current sound, balanced out with the kind of honest wonder and vulnerability of '90s ballads.

The aftermath was also a sight to behold: The crowd left in high spirits, game for the Lucky Me! photobooth featuring our favorite pun of the year, “As long as you lomi.” Even as they got on the escalators and exited the doors, they bounced along to the tendrils of a beat that hung in the air yet settled deep in their hearts.

So it’s true: Backstreet’s back, alright.