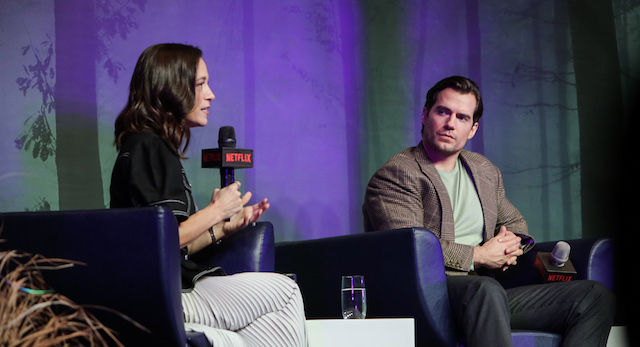 We also got to talk to The Witcher's showrunner about the series.

(SPOT.ph) There's nothing like a good leading man who simply refuses to be a matinee idol and wants to put in the work. Henry Cavill was practically born to play Geralt of Rivia—and he technically has, several times over, if we're talking the games—and showrunner Lauren Schmidt Hissrich has admitted to writing the character with his voice in mind.

But the actor also knows that part of the work is meeting fans' expectations, being a reader-gamer-nerd himself: When 20 of Cavill's fans got the chance to meet him, he greeted them with open arms and a big smile. (And would you just look at how effortlessly he holds a baby?)

We also had the chance to sit down with him and Hissrich separately to discuss Cavill's best takeaways from Geralt's character and storyline, Hissrich's history in writing television, and how The Witcher has changed (or not changed, in fantasy fan Cavill's case) their lives.

"The funny thing about playing this kind of role," Cavill shares, "is that, normally, what I do to turn off is go and read [these kinds] of books. So now I'm living in a perpetual cycle of fantasy genre. Which I'm happy with!"

"This genre is difficult, because there's a lot of balls to keep in the air," explains Hissrich, whose work on West Wing and Private Practice, ostensibly, did not include fantasy elements. "At the end of the day, I just have to trust my gut... I have to care about the characters." Her lead actor can confirm this: "What Lauren has brought to this is her own unique vision and a broader lens. I think fans are going to love [that she] provides [deeper backstory]."

The Witcher is now streaming on Netflix.