Video Interview With the Stars of Netflix's Crash Landing on You
Loading
Already a member? Log in
No account yet? Create Account
Spot.ph is your one-stop urban lifestyle guide to the best of Manila. 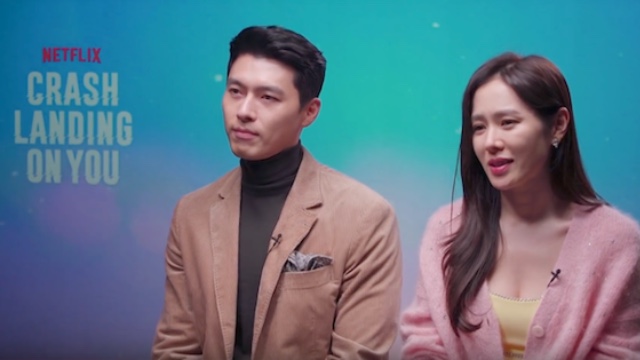 The Stars of Crash Landing on You Talk Roles, Destiny + More

We got the chance to sit down with them and ask about their latest K-Drama.

(SPOT.ph) It's often told that opposites attract, and it seems it holds true for Ri Jung Hyuk and Yoon Se Ri, the lead characters of Netflix K-Drama Crash Landing on You. Jung Hyuk is a high-ranking officer from North Korea, while Se Ri is an heiress to one of South Korea's largest conglomerates. As fate would have it, they meet at the border of North and South thanks to a paragliding incident. The premise seems totally bizarre, but fate has its whims. We got the chance to sit down with Crash Landing on You stars Hyun Bin and Son Ye Jin to talk more about their roles, and know what they think of the power destiny holds.

Star-crossed lovers are nothing new in the realm of storytelling, but Crash Landing on You takes a more nuanced approach to the trope: Jung Hyuk and Se Ri are from two different Koreas, and its implications are heavy and covered in several layers of politics and cultural differences. In preparing for the role of Jung Hyuk in particular, Hyun Bin shares: "Because I was playing a North Korean character, the North Korean accent was my priority. Before shooting, I took lessons, once again."

Heavy stuff aside, their differences are a great source of laughs. The outspoken Se Ri and the stoic Jung Hyuk are worlds apart, geographically and in terms of personality, but the two have been brought together by a chance encounter. The fictional characters are subjected to destiny's workings, but beyond the set and the production, Son, too, believes in destiny's pull. " I personally think about these things quite often in life. Everything just might be destined…I’m a bit of a fatalist; and I think our drama conveys these ideas as well," she shares.

Crash Landing on You is streaming on Netflix.