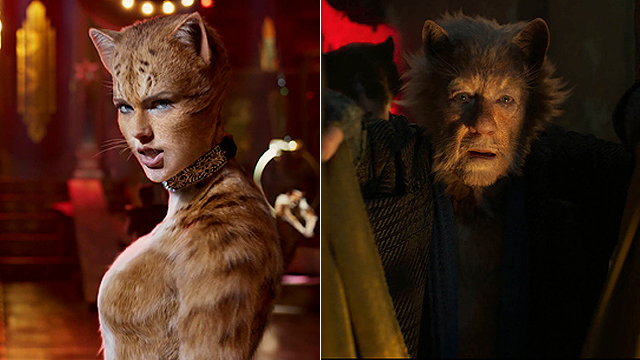 These are the kind of cats you'll want out of your "memory."

(SPOT.ph) Tom Hooper’s 2019 adaptation of the stage musical Cats has been the talk of the town for cinephiles and moviegoers everywhere…but maybe not for the best reasons. With its much-criticized visual effects, strangely proportioned production design, and just the general feeling of a failed experiment, Cats has become a perfect example of what not to do when you’re making a film adaptation of a musical that’s already pretty freaking weird to begin with.

The Andrew Lloyd Webber musical is a show about, well, cats, and for the most part, it’s all about cats introducing themselves and talking about why they should be the “Jellicle choice.” Being the Jellicle choice means being sent to what is called the Heaviside Layer, a place off this earth somewhere in the atmosphere where cats are reborn. At least that’s what we think it is, or are we just high on catnip?

Hooper’s adaptation doesn’t stray too far from the source material, but instead of cool costumes and impressive dance sequences like the stage show, he takes mostly A-list celebrities, morphs them into human-cat hybrids, and then makes them do some things that would make the creepiest horror movie villains shudder in fear or disgust, or maybe both. But look, Cats isn’t that terrible; there's much to applaud in its ambition and very distinct look, and it’s one of those “must be seen to be believed” blockbusters. Yet there’s also no denying that it’s a fiasco. We’ve watched and studied Cats, and have now used up all of our nine lives to create a ranking of the 10 most disturbing, nightmare-inducing cats from Cats that we would very much love to erase from our, er, memories.

Special mention: The cats of Cats are absolutely horrifying to look at, but the weird mice and cockroaches that appear in several scenes aren’t any better—and possibly much worse. The production team for some reason didn’t put as much effort into these creatures and seem to have cropped out human faces and pasted them on cockroach or mouse bodies in the most tragic way possible. But onto the stars of the show: the cats!

Here are the cats in Cats that might give you nightmares:

As an outsider looking in, Victoria the White Cat is the newest arrival to the alley and kind of works as the audience’s representative into this weird and wacky feline world. As a result, she’s quite a plain white cat with little personality and is the most straightforward look at what went wrong in the cat-human hybridization in Cats. The odd human face and body with “digital fur technology,” human noses, the strange positioning of the tail, Victoria features the most basic nightmares Cats can induce.

Taylor Swift’s Bombalurina is one of the few bright spots in a troubled production, bringing to life the sultry cat in a flirty and sexy manner during her one number. For Hooper and company, however, that means putting human breasts on a tiny cat body and Bombalurina of course shakes what the visual effects gods gave her. Plus, she also struts out in kitten heels, because who doesn’t love puns? Cat Taylor Swift is great but all the additions make her just the tiniest bit disturbing.

Gus is an older cat whose time in the spotlight has faded long ago. A former star of the stage, Gus just looks a bit dirty and frazzled, and that’s about as disturbing as his looks will go. What adds to the nightmares that Gus brings is Ian McKellen’s need to meow and purr in the strangest way when he’s first introduced. He also then licks milk off a saucer in a way an old cat would. It’s… a choice, and not of the Jellicle kind.

Grizabella is said to have once been the belle of the ball—a gorgeous, glamorous cat that people loved, but she's made a couple of bad choices that landed her in the fringes of society. She doesn’t look her best, and the strange positioning of a human face on her messy fur coat of a body doesn’t help. Also, Grizabella sings the musical’s most famous song, “Memory,” and Jennifer Hudson sings the fur ball out of it just like we expect her to—snot and all. The singing by Hudson is great, but it’s not the best look when your face has been transformed into that of a cat.

Wearing red pants and suspenders while sporting a giant handlebar moustache as he taps his way into that dark corner of your brain where you keep all the monstrosities is Skimbleshanks the Railway Cat—a cat… who likes trains? Who lives on a train? Who knows. Skimbleshanks isn’t offensive-looking, but the aggressiveness and the mysterious train obsession really add to this cat's potential as nightmare fuel.

There’s really no better way to describe Rum Tum Tugger than calling him the cat version of a  party boy. To some extent, we would say he’s the f*ckboy of cats. If you’re into a cat-ified Jason Derulo licking milk in a “milk bar”—yes, it's a bar but with just milk and all the cats just lap up the liquid—and sexually gyrating with other cats, then this “curious cat” is for you. For most, though, Rum Tum Tugger is not what you’d want to see in your dreams.

As the oldest cat in the group, Old Deuteronomy is regal-looking and highly respected. In a massive white fur coat, “Old Deut” makes her entrance looking lovely. She’s the one making the Jellicle choice, of course. Yes, Cat Judi Dench’s face is as off as the others, but for the most part, Old Deuteronomy is fine, even with her very weird and tiny cat feet. However, when Cat Judi Dench stares directly into the camera in what is one of the most disturbing fourth-wall breaks in the history of cinema, to remind us that cats are not dogs, it’s like she’s staring right into your soul while taking away the last shreds of humanity you had left after sitting through almost two hours of this nonsense.

Sporting a fat suit that creates the strangest body shape, James Corden’s Bustopher Jones has a grotesque quality to him. He’s over-exaggeratedly and disproportionately overweight, he likes to devour shrimp in one gulp, and then there’s also an extended sequence where Derulo’s Rum Tum Tugger pours some sort of drink into his mouth and Corden just licks and laps it up laying down, mouth open wide, tongue wagging—an image that makes us think there was no one on set who had the guts or gumption to say “no.”

Oh Idris Elba, what did you let Tom Hooper do to you? Once named by People Magazine as the sexiest man alive, Elba is transformed into the villain of the story, Macavity, a cat with magical powers that are never fully explained but hey, these cats are singing and dancing so who cares? At first, when he’s all mysterious and wearing a hat and coat, Macavity doesn’t look that bad. When the coat comes off, however, cue the horrifying screams of terror. Macavity isn’t as furry as the other cats, so Idris Elba’s body ends up resembling a naked mole rat’s. Since he’s the villain of the tale, then his horrific look definitely did its job, but those visuals definitely should’ve been put in the litter box, then put away for good.

She unzips her fur off her body. Unzips. Her. Fur. She basically peels off her skin to reveal a pink suit and glittery fur (skin? Who knows, really) underneath. She doesn’t just do this once, she does it twice! It’s a mortifying visual that is never explained, much like most of the Cats universe. Not only that, Jennyanydots, a lazy cat but with a flair for showmanship, also has mice and roaches whom she trains to perform with her, and then proceeds to devour them when she wants to. All we got from her psychedelic and baffling musical number is that Jennyanydots is a monster that must be stopped!

Cats is now out in theaters.