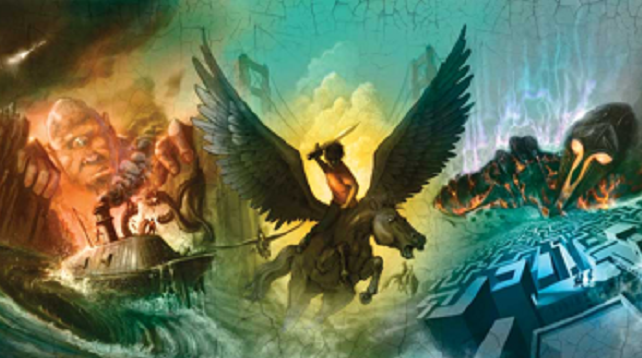 (SPOT.ph) You may want to sit down for this, demigods: Rick Riordan has announced a TV series adaptation of his books, Percy Jackson & the Olympians, on Disney+! The author himself has promised that he and his wife will be involved in the series' creation—so we can hopefully count on a more faithful retelling.

For the uninitiated, the mythology-based series revolves around Percy Jackson, a typical 12-year-old living in the U.S., who finds out he's actually the half-human son of Poseidon, the Greek god of the seas. Jackson is then thrown into an epic adventure with his fellow demigods into a wild world that is both modern and mythic. The five-book series was an undeniable part of every kid's life in the early 2000's so a series now is a pretty big deal; if you can't wait to finally see the story play out in live-action on screen, check out what we know so far:

You can now forget about the movies

The books got their first on-screen adaptation in the 2010's with two films: Percy Jackson and the Lightning Thief (2010) and Percy Jackson: Sea of Monsters (2013)—both of which weren't exactly what fans had in mind. For starters, Percy is 12 years old in the books, but his character was aged up to 16 in the movies.

Riordan himself wrote on his blog in 2018 about his experience during the making of the movies. "Once I saw the final script and saw what they were doing on the set, I realized I had to step away for my own peace of mind," he wrote. "I never saw either of the movies in their final form." Plus, if we're reading into this right, Logan Lerman, who played Percy Jackson in the movies, dropped some self-awareness on Twitter after Riordan's announcement.

Riordan will be part of the TV series' adaptation

As Riordan says, the TV series will be "following the storyline of the original Percy Jackson five-book series." Attention, folks: he states that the first season will be based on the first book, The Lightning Thief, so logic dictates five whole seasons, or one for each book!

"Rest assured that Becky [his wife] and I will be involved in person in every aspect of the show," said Riordan. The author was notoriously left out of the first film adaptations, and aside from a few consultations, was not part of the process. His two main gripes were the aging up of his characters, and the non-kid friendly language used, pointed out The Verge.

The series will be streamed on Disney+

Thankfully, those two main problems will most likely be fixed, as this adaptation is currently in the works with Disney's online streaming channel—which has a younger targeted audience. Not that anything will throw off the original generation that grew up on Riordan's books.

The series will be produced by Fox 21 TV Studios, according to Deadline. There are no details yet as to casting or dates—though we're definitely on-board with the idea of Lerman playing Poseidon—but we'll keep on the lookout. As Riordan said, "Buckle up, demigods! It's going to be a fantastic, exciting ride!"

Adventurer Savvy Seasoned Percy Jackson Rick Riordan Disney Plus Streaming Reads
Your Guide to Thriving in This Strange New World
Staying
In? What to watch, what to eat, and where to shop from home
OR
Heading
Out? What you need to know to stay safe when heading out