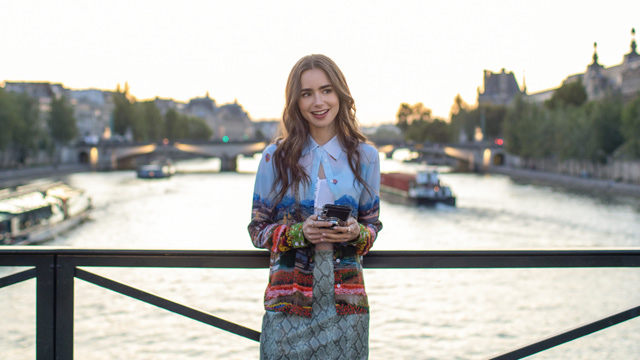 We talk to Emily in Paris herself about the new show.

(SPOT.ph) People often romanticize stepping outside of comfort zones, but it’s rare that we see someone jump right in without so much as a moment of hesitation. We don’t know if this is the motivation you need right now, but this upcoming 10-episode series on Netflix called Emily in Paris  might just inspire you to take that adventurous leap. Enter Emily Cooper (Lily Collins), a young marketing executive from Chicago who moves to Paris to work for a French luxury marketing company. Once Emily sets foot in the City of Love, she comes across challenges at work as the person bringing an “American perspective”, finding new friends—and even romantic prospects, all while taking in the sights and experiences unique to Paris.

“I wanted to do a show, kind of, where I feel like everybody can live vicariously through this experience of a person living there; living there for a reason and having a purpose,” says Darren Star in a virtual roundtable interview alongside Collins.

Collins herself found Emily’s adventures relatable, as she shares having had a lot of experiences similar to her character. “It’s a testament to Darren and the writers because those are genuine experiences that I had that I can say were real, and Emily went through them as well. I felt like Emily and I became very close through our experiences,” she adds, noting that it allowed her to have more empathy for her character.

The same goes for Ashley Park, who plays Mindy Chen, Emily’s friend in the series. In a separate roundtable interview, Park says that she connected to how Mindy effortlessly knows how to comfort somebody. “She's not just, you know, BS-ing somebody...she really is caring, but also very, very adamant about calling out...she keeps it very real. I think her inclination to friendship is my favorite thing about her,” she adds.

Of course, what’s a show set in Paris without talk of the clothes? Park was all praises for costume designer Patricia Field, who is known for her work in The Devil Wears Prada and Sex and the City. Aside from being at every fitting, Park was impressed with how Field put together pieces from “very attainable stores” alongside designer pieces. “It's like every person can have this kind of fashion, if you have the right eye and you're creative enough,” Park says.

Collins adds how their outfits have become “an extension of the character's personality and no one does that better than Pat Field, you know.” In the series, Emily's bright and bold personality is “represented in color and texture and pattern and shapes,” as Collins puts it, “and all of that is aesthetically so appealing with the backdrop of Paris.”

Apart from the wonderful sights and fabulous clothes, a huge chunk of Emily in Paris is focused on social media. Star, who has previously worked on hit shows like Sex in the City and Younger, sees social media as “part of the fabric of our lives now.” Aside from it being a “really wonderful storytelling device” for the character in the series, Starr adds, “That [social media] just felt like to me something that a young person would be really leading at a marketing team.”

The instantaneous nature of social media runs parallel with how quick Emily bounces back from her struggles on the show, and Collins thinks it has to do with her character’s optimism, resourcefulness, and what she calls “the American mentality of ‘everything is possible.’” “She's not afraid to ask for help. And in those moments, you know she can't quit,” Collins says. “She's not a quitter, and so I really love that mentality of asking for help when she needs it...she’s just really strong and passionate.”

Emily in Paris starts streaming on Netflix on October 2.

Greener Netflix Emily In Paris Adventurer Savvy Lily Collins Ashley Park Darren Star Streaming Services
Your Guide to Thriving in This Strange New World
Staying
In? What to watch, what to eat, and where to shop from home
OR
Heading
Out? What you need to know to stay safe when heading out