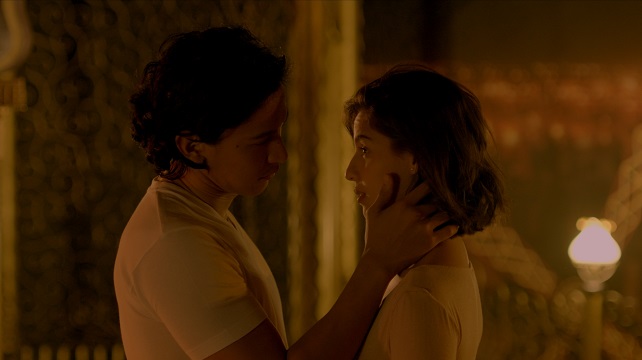 We talk to the actors about why the film is more than just a fun, steamy romp.

(SPOT.ph) So we’re going to pretend that you, reader, are totally innocent and know nothing about the alter world that exists on the local Twitterverse, where folks are completely anonymous—but definitely not in terms of their bodies. The alter world is basically the NSFW part of Twitter where people create fake accounts, a.k.a. “alters,” to post sexual content, meet other alters, and occasionally, come together IRL and hook up (pun intended). It is this subculture full of fake identities that Alter Me hinges upon to flesh out a very real connection. So basically yes, there’s a lot of sex in this film—and much, much more.

Alter Me lands on Netflix on November 15. The spunky film follows Aimee (Jasmine Curtis-Smith), a closed-off and jaded human resources manager who hires the services of Uno (Enchong Dee), one of the most coveted escorts in the alter world—but not just for anything sexual. The almost-too-hopeful and cheery Uno is in charge of teaching Aimee how to better connect with people and her own emotions, all while being her constant. The two may have initially connected through the alter network, but who knows how their relationship will play out in the real world?

The movie was originally supposed to be called “Love Fuccs” because, well, “Love fuccs talaga sometimes,” jokes director RC delos Reyes at an online media roundtable. The play on “fuccboi” and “sucks” was let go in choice of a title that was “more universal, would create more ‘recall’ with audiences,” explained the director—and for a movie that starts off in the “alter world,” it definitely sounds like the better choice.

Alter Me presents a Metro Manila we all know (and maybe even love)—a shiny office that’s most likely in Bonifacio Global City, the quaint houses crowded along Pasig river near Guadalupe Bridge, a café in Poblacion—and mixes it with the virtual world all its residents also live in. The alter world takes shape in cool, neon graphics floating on screen in an awesome mix of real life and animation. Plus, it’s this virtual world full of fake identities that eventually bring Aimee and Uno together—and for what else but a “booking,” (i.e. a hookup.) We’ll spare you from any further details lest we spoil things!

“For the longest time I've been looking for a role that is very sexy, risqué, something that's more in touch with a sexual self,” says Dee—and Uno’s character is definitely the ticket. Masquerading as @Daxxx99 (yup, with two extra x’s) in the alter world, the coveted escort somewhat ironically hunts for love with the connections he makes online. “I’m just happy because nakuha ko ‘yong gusto kong kwento at ‘yong character,” he adds, saying that it was huge bonus he got to work in a team full of young and forward thinking folks, director Delos Reyes and co-star Curtis-Smith included, to create a film that had a worthy statement.

Curtis-Smith and Dee also starred in Siargao (2017), along with Jericho Rosales and Erich Gonzales—but on opposite pairings. This movie marks their first silver screen appearance as each other’s possible “The Ones.” For Curtis-Smith, the role of Aimee is admittedly a step away from her usual PG ones, but she felt like it was time to do so. “When I read scripts, I’m always on the lookout for something bold at kayang panindigan ‘yong pagiging bold na ‘yon,” she says, jokingly adding “I like to do things that make me ask ‘Tama bang ginawa ko ‘to?’”

Curtis-Smith explains that she was at a point in her career where she’s asking herself this: “Am I someone who will always be conservative with my choices of films and roles? Like, will she always say no to kissing scenes? Will she always say no to intimate scenes?” Fortunately, Alter Me presented itself at the right time. “This is the perfect film to explore that, try that,” she explains, saying that entering this new territory was vital to letting Alter Me’s story really cement itself.

“I didn’t have as many hubad scenes [as Dee], so I didn’t have to work out so much,” adds Curtis-Smith cheekily. Aimee starts off as a jaded character in need of some form of release, if you know what we mean, and the alter world is a place where she can do just that. You know how they say it can never be just sex though? Well, it’s when she begins to open up to Uno—and herself—that things begin to get complicated, moving the story from a simple hookup connection to much more.

From the very beginning, the film was built around connections—virtual and otherwise—says Delos Reyes. “We wanted to play with the idea of connections and this was the best way.” While it may seem counter-intuitive, there’s something about the very real connection of Aimee and Uno stemming from an alter-world agreement that’s sure to resonate with people today, especially at this time. Raise your hands if all you want is some real human connection but it feels like all you have is the Internet!

“With that, naging setting ‘yon for these two characters, Aimee and Uno, to meet up—but what’s [more] important is how they meet up and how they connect to themselves in the real world,” continues the director. “Ang gusto naming iparating sa movie is you learning to love yourself before you open up to the world,” he adds. Think of this film as a sexily dressed-up Aesop’s Fable about self-love, set in the crazy, current world of alters—and TBH, who wouldn’t want a worthy reminder clothed in a fun, steamy film?

Adventurer Savvy Enchong Dee Netflix Jasmine Curtis-smith Staying In Streaming Services Alter Me
Your Guide to Thriving in This Strange New World
Staying
In? What to watch, what to eat, and where to shop from home
OR
Heading
Out? What you need to know to stay safe when heading out