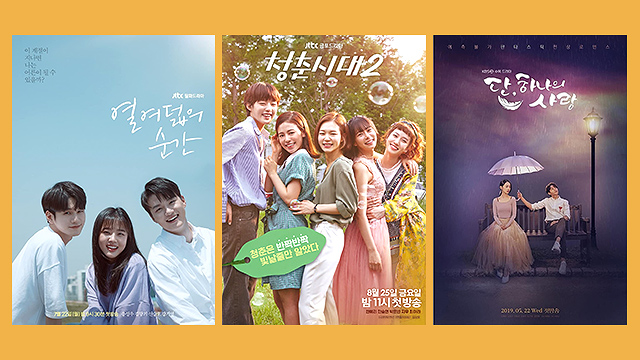 For your next binge!

If you have the habit of browsing blindly for K-Dramas through Netflix, you’ll soon realize that some shows are easier to find than others. But hey, just because you have to dig deeper for less popular series doesn’t mean they’re not worth the watch.

Below, we list down 10 hidden K-drama gems to check out on Netflix:

In this coming-of-age series, an 18-year-old is forced to transfer schools after being sanctioned for a violation he did not commit. His plans to live a quiet, recluse life in his new school, however, is ruined when he's blamed for yet another crime.

In order to return to heaven, an optimistic angel with the knack for getting into trouble must find true love for the talented yet arrogant prima ballerina, Lee Yeon Seo. His mission proves to be difficult when he finds out that Yeon Seo's tragic past has led her to become distrustful, rendering her unable to love.

After being fired from Unicon for igniting a national controversy, the brazen Bae Ta Mi is offered a job by her previous company’s rival, Barro. There, she’s challenged to turn it into South Korea’s number one web portal, all while dealing with a co-worker set on antagonizing her, and a man eager to romance her every step of the way.

A 17-year-old violin prodigy supposedly off to Germany to study gets into a bus accident and falls into a coma for 13 years. She wakes up at the age of 30 though she still has the mentality of a teenager. As she attempts to piece her life back together, a stranger insists on helping her while she’s naive to the fact that he might be responsible for her accident all those years ago.

Two workers at the Incheon Airport, who also turn out to be polar opposites of each other, continuously cross paths at their job. Though their meeting starts off at the wrong foot, they soon eventually develop a fondness for their interactions, and soon, perhaps, for one another.

When Kim Hye Ja stumbles upon a watch that lets her travel through time, she accidentally ends up turning into a 78-year old woman overnight. Thus ensues her complicated love story with Lee Joon Ha, a young wannabe reporter who wastes away his own time and has decided to live lethargically instead.

A scorned and heartbroken gambler named Oh Soo results to scamming Oh Young, a rich young heiress, in order to pay off his debts to a dangerous gangster. Unfortunately for Oh Soo, his scheme falls sideways when he finds himself falling for the blissfully naive Oh Young who fully believes that he’s her estranged brother.

The drama centers on five girls who come of age in their 20s as they all live together in a house called Belle Epoque. Each faced with their own struggles and personal issues, they soon learn to navigate the trials life throws at them while maintaining the close circle they’ve built at home.

Yo Se Joon, a successful CEO at a real estate company, has the special ability to time travel whenever he rides the subway. Upon seeing a bleak future for himself, he attempts to change his fate by marrying a bright and cheerful photographer, though he harbors no real feelings for her.

My Mister centers on three middle-aged brothers, particularly Park Dong-hoon, an engineer whose personal life falls apart after he learns of his wife’s infidelity. Stoic and distraught, he crosses paths with Lee Ji Eun, a struggling young woman in her 20s who ends up drawn to his charms. Together, the two develop a close bond and help each other to be happier.

K-drama Moment At 18 Angel's Last Mission: Love Search: Www Still 17 Where Stars Land The Light In Your Eyes That Winter The Wind Blows Hello My Twenties Tomorrow With You My Mister Adventurer Savvy Netflix Syndication Syn-00331 Staying In
Your Guide to Thriving in This Strange New World
Staying
In? What to watch, what to eat, and where to shop from home
OR
Heading
Out? What you need to know to stay safe when heading out