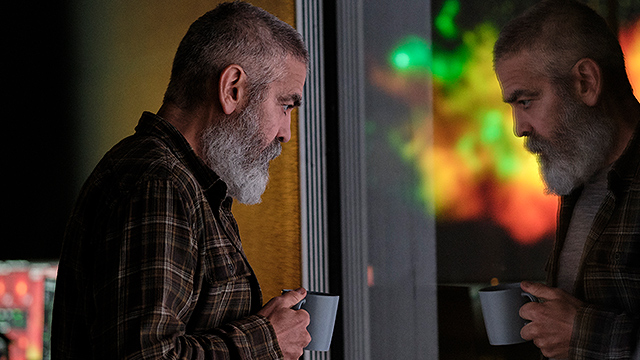 It's not just to look at that beard he grew for The Midnight Sky.

(SPOT.ph) As if you weren’t already stressed enough. We know what you’re thinking, 2020 has not been great and the last thing you need is another reason to get your anxiety going again—but trust us when we say The Midnight Sky is worth it. The sci-fi, end-of-the-world tale directed by and starring George Clooney lands on Netflix on December 23! Allow us, and the man himself, to expound on why this will be worth taxing your brain cells over below.

There are two stories that meet in The Midnight Sky. One is about Augustine (Clooney), a scientist stuck in an Arctic observatory—with a child in tow—in the midst of an Earth-ending catastrophe. The other is about Sully (Felicity Jones) and her fellow astronauts hurtling through space heading to Earth, unaware that there is nothing left to come home to. The aging Augustine must rush to warn the astronauts about what’s going on before it’s too late for them to turn back. So we know the trailer has you a little panicky, but there’s much more to this film than a good adrenaline rush.

“It's not an action film, it's much more of a meditation on life. It's a meditation on what we are capable of doing to one another if we're not careful. And, so I wanted to tell that story,” says Clooney in a roundtable interview with SPOT.ph and other members of the press. The Midnight Sky is based on the book Good Morning, Midnight by Lily Brooks-Dalton. “What is left when you take everything else away?” the author is known to ask during interviews, hinting at the core of both the movie’s and the original novel’s narrative.

“It takes a little bit of Gravity, a film I’ve done, and takes a little bit of his film, The Revenant, and ties them both together in an organic way,” said Clooney in production notes for the film about the adaptation written by Mark L. Smith—yup, the same guy behind the acclaimed 2015 vengeance and perseverance film The Revenant. Gravity, meanwhile, is the hair-raising 2013 film that had everyone in cinemas holding their breath the entire time. It starred Sandra Bullock and Clooney as astronauts stranded in space.

So, you can kind of see where this post-apocalyptic film will take you: Off to a mix between Gravity’s groundbreaking look at the depths of outer space and the limits of technology, and The Revenant’s very tension-filled look at humans and what we’re capable of. “It had some of the same ideas that attracted me to The Revenant—a journey, man against nature, what a person could overcome,” Smith said about the novel. “The most important thing is that it felt grounded and real. It’s not sci-fi. It’s not fantasy. These are real characters with real problems and real emotions. They’re dealing with problems here on Earth now. We never wanted to stray too far with the technology.”

Both Gravity and The Revenant were notoriously difficult to shoot, so it makes sense that The Midnight Sky was not without its challenges either. Clooney and crew spent months on a glacier in Iceland, Vatnajökull, the second largest in all of Europe, to shoot the Arctic scenes. “When the winds would come in,” shares Clooney of his experience battling windstorms in the interview, “You can see this wall coming towards you, and you know it’s about to hit. You get into it, this hurricane, for around five minutes or whatever it takes.” Crew members had to be tied together with string to avoid getting lost. “It’s really amazing and challenging; great for an actor, hard for a director,” he jokes.

Funnily enough, the youngest member of the crew, Caoilinn Springall, who plays the kid stuck in the observatory with Augustine, probably had the most fun shooting in extreme conditions. “She’s Irish, so she’s a tough, tough little girl,” says Clooney, who also has some Irish ancestry himself. “We were constantly picking her up and carrying her back into the van and she’d come running right back out,” he laughs.

Plus, it looks like Springall gave the Academy Award-winning actor a run for his money, too. “I would say to her, ‘Okay. Give me your scared face,’ and in one take, she’d do it and it was perfect. And then I’d say, ‘Okay. Give me your sad face,’ and she’d look sad and it was perfect. She really blew a hole in all of us old actors who have our methods of getting into an emotion,” Clooney said in the notes.

Work on The Midnight Sky began long before anybody could have even thought about how bad 2020 would get, but the unintentionally timely release might just give us something we all need. “It is relevant, now [but] you don't relish the idea that the story becomes more relevant in the middle of a pandemic. That's an unfortunate side effect,” says Clooney in the interview, who adds that the movie’s themes remain relevant no matter the day and age. “We're always seeking a way to communicate, a way to be home, and be near the people we love. We're always questioning our actions and whether or not we're doing enough. And all of those things sort of play out in this film.”

But why space? This is Clooney’s second big-ticket film about what is beyond us. “If you think about it, all of us, humans, we only deal in finite things. Our lives are finite. Everything we know is finite,” but outer space is not like that, he explains. It is a common idea that by the time we’ve maxed out the Earth, humans will head on to outer space. And space, Clooney explains, is the best way to illustrate this poetic, more emotional take on how it all ends.

At a time when it seems like the apocalypse certainly feels nearer than it has ever been, The Midnight Sky “should be a warning shot about denying science, or creating divisiveness, and hatred and being unkind to one another. It should be a warning shot of all those things,” continues the actor. “But it should also be hopeful. [It was made] with the idea of saying this whole experiment of humankind is worth it. It's worth the effort.”

The Midnight Sky streams on Netflix on December 23

Adventurer Savvy Seasoned George Clooney Netflix Sci-fi Streaming Greener Streaming Services The Midnight Sky Staying In
Your Guide to Thriving in This Strange New World
Staying
In? What to watch, what to eat, and where to shop from home
OR
Heading
Out? What you need to know to stay safe when heading out