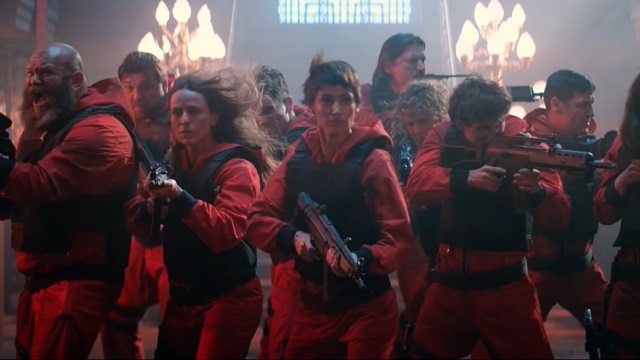 Here's everything you should know about how La Casa de Papel is ending things.

(SPOT.ph) The last season of Money Heist—La Casa de Papel in its homeland of Spain— finally has release dates! Yup, we are this close to witnessing how our favorite cast of badass thieves ends things in season five, which will be dropped in two parts. Looks like Netflix is really amping up the hype with this one. As they say, good things come to those who wait.

Netflix revealed that the first volume of Money Heist Season 5 drops on September 3 and then we have to wait three whole freakin' months for the second volume, dropping on December 3. Meanwhile, we'll have to do with this gritty teaser as a sneak peek into what's coming.

What goes down in Money Heist Season 5?

The teaser has the entire gang in the midst of what looks to be the ultimate battle at the Bank of Spain—minus Nairobi (Alba Flores), unfortunately. Things are coming to a head after the gang have been in the bank for over 100 hours now: they've lost one of their own, and the Professor (Álvaro Morte) is now being held at gunpoint, and for the first time ever, does not have an escape plan.

To make things worse, the entire army is on its way to end their siege. "What began as a robbery will turn into a war," says the Netflix description.

When the final season was announced in June 2020, the plan was for 10 episodes with the cast— Úrsula Coberó as Tokyo, Álvaro Morte as The Professor, Itziar Ituño as Lisbon, Pedro Alonso as Berlin, Miguel Herrán as Rio, Jaime Lorente as Denver, Esther Acebo as Stockholm, Enrique Arce as Arturo, Darko Peric as Helsinki, Hovik Keuchkerian as Bogotá, Luka Peros as Marseille, Belén Cuesta as Manila, Fernando Cayo as Coronel Tamayo, Rodrigo de la Serna as Palermo, Najwa Nimri as Inspector Sierra, and José Manuel Poga as Gandía—reprising their roles.

Creator Álex Pina has dropped some updates with the new two-part format. They "used every tool we could to create the sensation of a season finale or series finale in the first volume itself," Pina said in a Netflix statement. The first half will present the gang "in an extremely aggressive genre."

This means that the second volume will be more about where the characters are emotionally. "It is a journey across their sentimental map that connects us directly to their departure," added the creator. BRB while we binge all past seasons to prep up for this goodbye.

Adventurer Savvy Seasoned Money Heist La Casa De Papel Netflix Streaming Services Staying In
Your Guide to Thriving in This Strange New World
Staying
In? What to watch, what to eat, and where to shop from home
OR
Heading
Out? What you need to know to stay safe when heading out