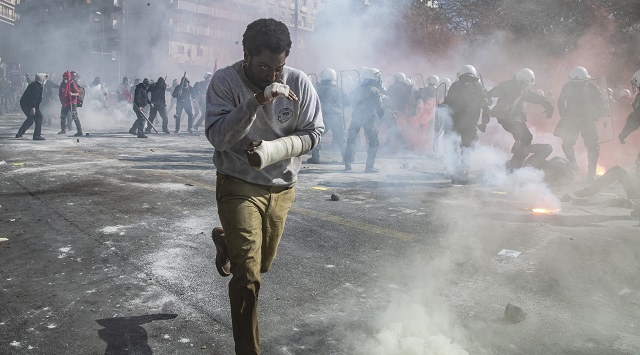 A chase film that stars a hero with no particular set of skills? It's real.

(SPOT.ph) The best thing about action films is that they typically give us some idea of what being super-human is like—or you know, at least physically fit enough to run for five minutes straight and still have some energy left to fight bad guys. Think Liam Neeson and his "very particular set of skills" in Taken. But what happens when a totally ordinary American tourist finds himself at the center of political intrigue? Just check out the latest Netflix thriller Beckett, which proves the desire to live makes for good running motivation.

Beckett stars John David Washington—as in son of that Denzel Washington—as titular character Beckett. He and his girlfriend April (Alicia Vikander) are off vacationing in some remote part of Greece. But before you start thinking Luca Guadagnino's Call Me By Your Name—he played producer for this one—Beckett falls asleep at the wheel and drives their car into a house. When he wakes up at a hospital, April is gone and instead, there's a sketchy policeman probing him about the strange figures he saw at the supposedly "abandoned" house they crashed into.

Also read: 10 Adrenaline-Fueled Action Films on Netflix, Ranked By How Crazy They Get

What follows is a paranoia-inducing chase as Beckett pretty much runs all the way to the U.S. embassy to find someone he can trust. The sketchy cop and a strange blonde woman are hot on his heels the entire time—and Beckett proves you don't have to be an ex-agent of sorts to be good at escaping. Cliff jump with a broken arm? Easy. Endlessly running through Greece all while heaving and clumsily trying to keep going? Very, very real.

John David Washington Did His Own Stunts in Netflix's Beckett

In the usual thriller movie, "There's always something heightened, super-human, about the main character and his abilities and intelligence," said the film's director Ferdinando Cito Filomarino—which is defintely not the case in Beckett. "What we were looking to upend was in fact, what if this character is just an ordinary guy? Who is not a spy with very special abilities?" he said in a Netflix interview.

True to character, "I wasn't running a lot in preparation for it," Washington said. "It's not like Beckett's this marine, this Navy SEAL. This is the guy that played a little bit of football in high school," he explained. "Ferdie had me running for my life, man. He really put me to the test," said Washington cheekily about the director.

Washington did confirm that all that running and more was him. "That is all me." While Filomarino praised him for being able to "immerse in the landscape of the character, what he was going through, and brought so much depth to it. While at the same time, asking to do all his own stunts by himself. Basically, a dream come true."

Beckett is a raw and real type of thriller where "you get to see a character push himself, fighting for his right to live," said Washington. Filomarino wanted to "Try to establish something that's grounded, and everything that happens to Beckett always has a feel of reality to it." And yup, even us couch potatoes could still totally relate to Beckett's running.

But as to whether Washington himself would have the same tenacity as Beckett? Well, "I'm not going to lie. Spoiler alert. I don't know if I'd have survived."

Adventurer Savvy Seasoned John David Washington Action Beckett Netflix Streaming Services Staying In
Your Guide to Thriving in This Strange New World
Staying
In? What to watch, what to eat, and where to shop from home
OR
Heading
Out? What you need to know to stay safe when heading out