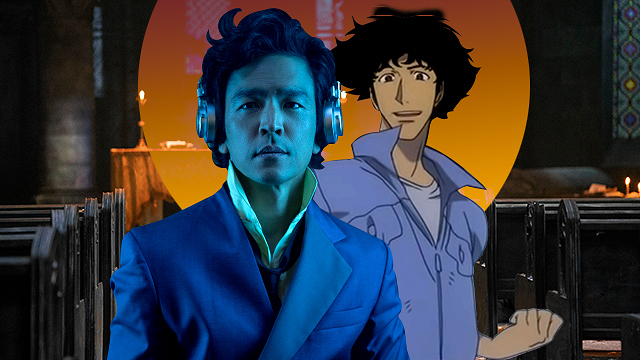 John Cho as the witty, deadly Spike Spiegel? We're here for it.

(SPOT.ph) There was a time pre-streaming that people would actually wait for the next episode of their show to air—just like you probably did for Cowboy Bebop. This late '90s neo-noir anime had everything: a set of funny, kick-ass protagonists saving a futuristic neon world set to an epic OST, to mention a few.

You can relive all of that, minus the waiting for the next episode, come November 19! Netflix is dropping a giant nostalgia-filled live-action remake of Cowboy Bebop on that date. And looking at the first official stills, it is very likely this epic version is going to get the beloved anime even more fans.

Taking on the role of the darkly funny Spike Spiegel is John Cho. The actor has definitely come a long way from the Harold and Kumar days and TBH, seeing him in the blue suit just feels right.  Mustafa Shakir is Jet Black, the once-good-now-jaded ex-cop, and Daniella Pineda is Faye Valentine, the street-smart amnesiac who spent decades in cryogenic sleep.

And yup, Ein the corgi makes an unmissable appearance! The biggest missing piece here is the fifth member of the ragtag team, whiz kid Ed. Netflix has neither confirmed or denied the character's participation in the live-action—but we have our fingers crossed. It just wouldn't be Cowboy Bebop without Ed.

As a refresher, this neon-dream of an anime is set in 2071. After Earth became uninhabitable, humanity moved to colonize the rest of the solar system. Spiegel is a bounty hunter working for the Inter Solar System Police, and is known as a cowboy. He leads his team around the galaxy capturing bad guys—for the right price.

The OG Cowboy Bebop was produced by Sunrise Inc. and originally aired in Japan in 1998. It soon became a global fave thanks to its wide mix of genres and is one of those series that act as a gateway to the wide, wild world of anime.

André Nemec and Jeff Pinkner are showrunners for the live-action remake. Netflix also worked with folks from Tomorrow Studios and the OG Sunrise Inc. Original anime director Shinichiro Watanabe was on board as a consultant. And if you're worried about the live-action version's soundtrack, then note that original composer Yoko Kanno—who gave us the OG's epic jazz-rock-synth OST—worked on the remake, too!

ADVERTISEMENT - CONTINUE READING BELOW
What Everyone Is Reading

Adventurer Savvy Netflix Nostalgia Cowboy Bebop John Cho Streaming Services Staying In
Your Guide to Thriving in This Strange New World
Staying
In? What to watch, what to eat, and where to shop from home
OR
Heading
Out? What you need to know to stay safe when heading out