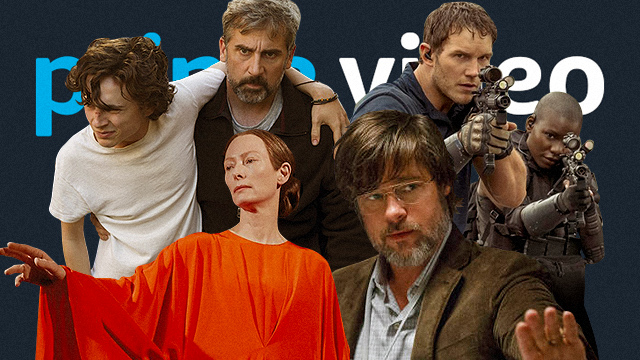 These titles deserve a spot on your watch-list.

(SPOT.ph) Not sure what to stream next? We got you. This time, we looked through the movie library of Prime Video to round up some of the best films to stream on the platform! From no-fail rewatches of huge blockbusters to offbeat picks and originals, these are sure to be worthy additions to your watch list.

Get ready to binge-watch these 10 best Amazon Prime movies:

A lesson in economy and how the world’s intangible forces move—no, not love—but in an entertaining and actually understandable manner. That’s what The Big Short is. It follows three different storylines all happening at the same time, leading up to the global financial crisis from 2007 to 2008. There’s the ensemble cast led by Christian Bale, Steve Carell, Ryan Gosling and Brad Pitt; cameos by folks like Margot Robbie, Selena Gomez, the late Anthony Bourdain; and even fourth-wall breaks to make sure the audience is still keeping up.

It is the year 1977. An American dancer named Susie (Dakota Johnson) finds herself at the Markos Dance Academy in the height of the “German Autumn,” a period of political distress caused by the far-left Red Army Faction. Before you think this an odd mix of politics and dance, though, we’ll just dive right in: It seems the old academy is actually home to a coven, as in, of witches—not what you expected, is it? This film was directed by Luca Guadagnino and is a much bleaker but no less entrancing homage to the original 1977 psychedelic one.

Chris Pratt takes on the sci-fi fantasy adventure hero character pretty dang well, but he sheds off the kooky Star-Lord character for this more serious take! The Tomorrow War is set in an alternate reality where people of today are sent to the future in order to fight a world-ending war versus aliens. So there’s an alien take-over, some time-bending elements, and Pratt as a dude fighting to save his family (and therefore, the world). It isn’t the most well-thought-out action film out there, admittedly, but Pratt’s performance makes for a thrilling watch.

We’re suckers for cutesy films about teenagers in love, yes, but this isn’t your typical cookie-cutter rom-com! In this Groundhog Day-meets-The Fault in our Stars (in a way) flick, we follow Mark (Kyle Allen), a typical teenage boy who just so happens to be stuck in a time loop. He then meets a girl, Margaret (Kathryn Newton) who is the only other person who realizes what is happening. The two then go on and make the most of the ever-repeating day—only it seems Margaret is far less willing to get out of the time loop than Mark.

Looking for some nostalgic laughs? Check out the sequel to the 1988 film Coming to America; that’s a whole 32 year-difference (Not an attack, we promise!). Prince Akeem (Eddie Murphy) now has fully grown kids, who happen to be all daughters—unfortunately meaning that they cannot inherit the throne, for some crazy reason. His dying father, King Jaffe (James Earl Jones) reveals that he had actually sired a son while at his original escape to Queens, New York, sending him back on a wild search.

Yup, you can watch this epic Western legally. Remember when this Alejandro González Iñárritu film first dropped? We bet your butthole was clenched the whole time. Leonardo DiCaprio stars as the incredibly tenacious Hugh Glass, a frontiersman who ends up in the wilderness after having been abandoned by the men he was working for—while also seeking vengeance for the murder of his son, Hawk (Forrest Goodluck), whose mother was a Native American.

Only Donald Glover would try to impress Rihanna with those dance movies—and actually look good while doing them. This pretty short feature runs for just about 55 minutes and feels more like an extended short story-slash-musical, but still manages to pack insight into how dark idyllic-looking island life can get. Deni (Glover) and Kofi (Rihanna) are a couple and are both blue collar workers. Deni has dreams of holding a music festival for his community—something the big bosses aren’t too keen on as it will affect productivity.

Acclaimed filmmaker Spike Lee lent his hand to this filmed performance of a play by Antoinette Nwandu. It definitely isn’t your typical feature; the play is an urban tale influenced by Waiting for Godot and the Exodus. It features two homeless black men out on a street corner, waiting for them to “pass over” into the promised life of an American dream—while plagued by the ever-present threat of police brutality.

Joaquin Phoenix plays John Callahan, a recovering alcoholic who became quadriplegic after a drunken car accident with Dexter (Jack Black). On the road to recovery, he meets a bunch of colorful characters: the randomly rich Donnie (a hippie Jonah Hill), Swedish physical therapist Annu (Rooney Mara), and more—all while developing his skill at cartooning. This flick is an unexpectedly wholesome—but no less cutting—tale of lost and broken souls.

Steve Carell and Timothée Chalamet go down the intense drama route in this retelling of a true story. Based on memoirs by David Sheff and Nic Sheff, Carell and Chalamet play a father and son trying to make it through the son’s addiction. On surface, Nic is your average teenage boy—until his dad David finds troubling signs of drug abuse. Nic ends up in and out of rehab, forcing his relationship with his family—and most especially his dad—to reach several breaking points throughout the years.

Adventurer Savvy Seasoned Prime Video Streaming Services Suspiria The Big Short The Tomorrow War The Map Of Tiny Perfect Things Coming 2 America The Revenant Guava Island Pass Over Dont Worry He Wont Get Far On Foot Beautiful Boy Guide Greneer Staying In
Your Guide to Thriving in This Strange New World
Staying
In? What to watch, what to eat, and where to shop from home
OR
Heading
Out? What you need to know to stay safe when heading out