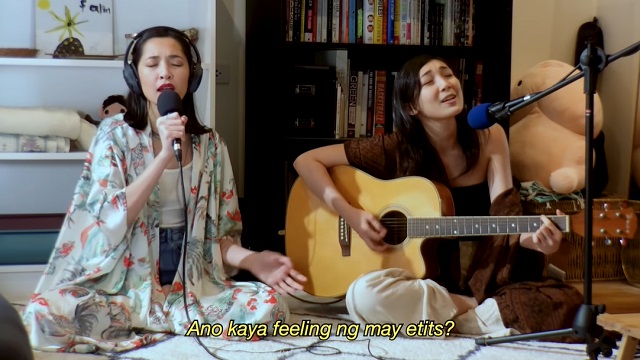 (SPOT.ph) There's a certain thought that pretty much everyone who doesn't have male genitalia has had, you know, during those less than lucid moments: What does it feel like to have penis? Now before you get scandalized, we have proof that it really is a thing some non-penis carriers think! Sketch comedy channel SOLID OK dared to ask that question—along with many others—in a hilarious new song. The title? "Ano Kaya Feeling ng May Etits?" Yup, a solid question indeed.

Also read: What the Heck Is "This Funny Filipino Comedy Channel Thing"?

Singing comedy duo-slash-geniuses Sari & Chi released their song on the SOLID OK channel on September 29. Featuring a guitar, excellent vocals, and some very profound questions, the song is one heck of a banger. The two built on the central question about what it would be like to have male genitalia—"I don't mean sexually, just anatomically," they clarify—and rounded it out with a resonating bridge about periods. We could probably make an entire thesis on this song alone but hey, how about we just show you the best, funniest questions from the song below!

SOLID OK is a comedy channel that started in 2018. Remember that viral parody of the wedding SDE turned aksyon? Yup, that was from them! When we first talked to founder and director Ryan Puno, he said that the channel name was a play on the typical Pinoy response "Sobrang K lang!"—but this time, he was going for an expression that "is so clearly defined in the middle. No overpromise. No extravagance." Well, we don't know about you but Sara & Chi's new song deserves an extra solid OK! Check out the full song below.