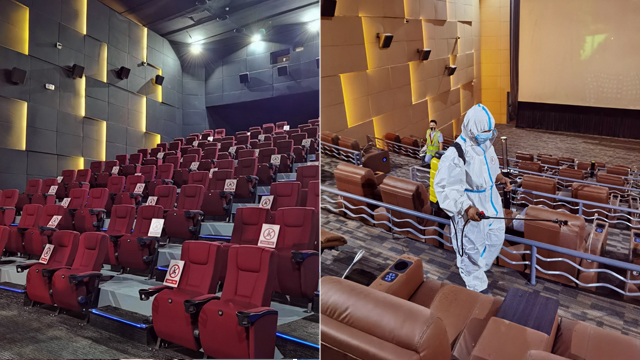 Metro Manila Cinemas Are Now Prepping for Their Big Comeback

Even micro-cinema Cinema '76 has started their prep.

(SPOT.ph) It has been more than a year since indoor cinemas in Metro Manila closed their doors due to the quarantine—and it looks like they may finally open up once again! The National Capital Region will be placed under Alert Level 3 starting Saturday, October 16. Aside from changes to staycation rules and such, one big difference is that the new directives from the Iner-Agency Task Force will allow indoor cinemas to open once more. We know, we know, this has happened before—in March, remember?—but it seems there's a little more certainty in the air as several malls and establishments have begun the move to reopen!

So first things first, there are no specific dates yet announced by the different cinemas for their reopening. While the IATF gave the overall greenlight, malls and cinema houses will have to align first with their local government units, and of course, internally, before they can set a date for reopening. The general rules are that only fully vaccinated individuals will be allowed, the one-seat-apart rule will stand, and cinemas can only operate at a maximum of 30% capacity, among others.

"We are now coordinating with the local government and our engineers to make sure that your unique movie-going experience is as safe and enjoyable as much as possible," said Irene Jose, COO of Uniprom Inc. on the plans of Araneta City. They are in charge of the Gateway and Ali Mall Cineplex in Araneta City, Cubao. Jose noted that it has been a 19 months since they closed.

Megaworld Cinemas—a.k.a. the one behind cinemas in Eastwood, Uptown, Newport, and more—have also started coordinating with authorities for reopening. At the same time, they've started prepping their theaters and finalizing protocol for moviegoers. Cinemas are being retrofitted for safe distancing and better air filtration.

Meanwhile, popular micro-theater Cinema '76 is also starting up their gears. "We look forward to reviving the exhibition industry soon. Producers, distributors, and cinema exhibitors are working hand in hand. Of course, safety first, always," noted general manager Daphne Chiu stated. The theater is working on rehiring staff, testing equipment, rehearsing protocol procedures, and a lot more. "There's a lot do before we reopen, but like everyone else, we can't wait to see the movie fans back in the cinemas."

This is not the first time cinemas we're allowed to reopen

Indoor cinemas were given the greenlight to open in March by the Task Force in an earlier directive when Metro Manila was under GCQ. No cinemas reopened at that time though—Pasig City Mayor Vico Sotto was one of the first to rule that movie houses within his jurisdiction will remain closed. Still, with the arrival of vaccines, it seems there's more hope for this one! We'll keep watch for when the movie houses have announced reopening dates.