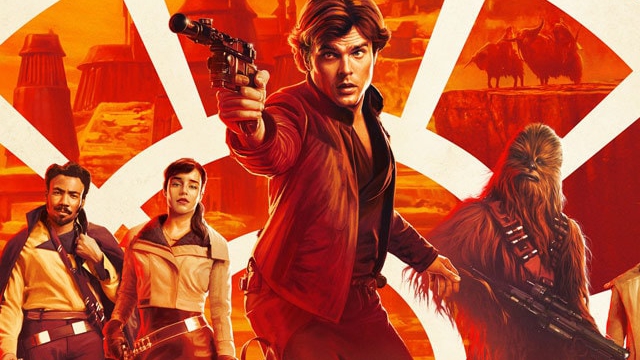 May the Fourth Be With You: A Look Back on the Movie That Almost Killed Star Wars

It's perhaps why we haven't seen a Star Wars movie since 2019.

(SPOT.ph) While we in the Philippines not-so-patiently wait to be able to enjoy the stories of The Mandalorian, The Bad Batch, and the upcoming Obi-Wan series Kenobi on Disney+, May the Fourth has once again rolled around—allowing us the time to reflect on the five Star Wars films that have been released since Disney bought the lucrative franchise back in 2012.

The film we have lined up for re-examination? Not the divisive The Last Jedi nor the critically planned finale The Rise of Skywalker. We’re looking at the Star Wars film the general public had no interest in seeing in cinemas: 2018’s Solo A Star Wars Story.

The Troubled Production of Solo A Star Wars Story

But first, some backstory: when Disney bought the Star Wars franchise from its creator George Lucas in 2012, they announced that as well as moving forward on a sequel trilogy (Episodes VII through IX), they also planned on releasing films separate from the main Skywalker Saga in between those Episodes. These anthology films would be called Star Wars Stories, and the hope was that they’d allow Disney to release a Star Wars film in cinemas every year–much like how Marvel is able to produce from two to three films a year for them.

The Han Solo prequel film was slated to be Disney’s second anthology film, which would follow in the success of Rogue One, their premiere Star Wars Story. The prequel’s screenplay was written by legendary Star Wars writer Lawrence Kasdan – who co-wrote The Empire Strikes Back, Return of the Jedi, and The Force Awakens – and his son Jonathan Kasdan. Initially hired to be the film’s directors were Phil Lord and Chris Miller, the comedic minds behind The LEGO Movie, 21 and 22 Jump Street, and the producers of Spider-Man: Into the Spider-Verse.

This was before the dark times, before… production troubles. Nearing six months into filming – and with millions of dollars already spent – the duo of Lord and Miller were fired as the directors of the film over creative differences. Lucasfilm felt as though their sensibilities for comedy and improv strayed too far from the original screenplay of the Kasdan’s. Lucasfilm quickly got veteran director Ron Howard as replacement to reshoot the entire film under a singular vision.

This unsurprisingly cost the budget to bloat up to nearly $300 million, way more than what should be spent on a standalone spin-off film. To make matters worse, Solo was Disney’s bet to win back die-hard fan sentiment after main saga film The Last Jedi notably angered a vocal section of the Star Wars fanbase with its treatment of the legacy characters.

It proved to be a misguided bet, as the film opened in the summer season of 2018 and only ended up making just shy of $400 million, making it the biggest box office bomb of the Star Wars franchise and causing Lucasfilm to put a hold on Star Wars film projects for the time being. It has been four years since, and Lucasfilm has not announced any Star Wars titles to be in production.

Someone Has to Say It: Solo Is One of Disney’s Best Star Wars Stories

However, in spite of its troubled history and unfocused, targeted pandering, Solo: A Star Wars Story is ironically the Disney production that skews closest to Lucas’ original vision for the universe and is—even just simply—a blast of a space-adventure spectacle that’ll keep you entertained for a couple hours. Prior to its release, the question I asked was, “Who is this Han Solo prequel movie even for?” Turns out, it’s for me.

Between this film and Rogue One, it’s clear that Disney wants to explore the morally grey areas of the Galactic Civil War (the setting of the original trilogy) via their anthology films. While Rogue One depicted the perspective of the boots-on-the-ground, unsung heroes of the original trilogy, Solo explores the world of bounty hunters, grifters, and crime syndicates. It’s here we meet the galaxy’s outcasts, the everyday hustlers who couldn’t care less about the events of the main saga, as they’re primarily focused on survival.

Ironically, this is where we meet the soon-to-be main player of the saga, a young Han Solo (Alden Ehrenreich). His journey from idealistic and hopeful street grifter to the jaded and cynical bounty hunter we meet at the beginning of A New Hope is the thematic anchor point of the film, and it’s through this lens we meet other morally ambiguous characters who also sacrifice their ideals in order to survive.

It’s revealed that Solo, the name, is given to Han when he tells an Imperial Officer that he’s all alone, having just been separated from the love of his youth, Qi’ra (Emilia Clarke), by a sinister crime boss. It’s a fascinating development which reveals that one of the coolest things about the character is merely a somber reminder for him of all the people that have betrayed him or that he’s lost along the way… even if the execution is silly. It’s still Star Wars, so expect it to lean more on sincere camp, rather than self-seriousness.

The prequel film keeps at this approach of emphasizing loneliness when building up the Han Solo character. The film presents “fan service” of Han becoming the Han we are familiar with, but in such a way that’s foreboding for the tragic events that will force the young, idealistic Han to turn into an untrusting, non-believer. He receives his signature blaster right before the botched train heist that gets him into the world of the crime syndicates. Later in the film, he makes the famous Kessel run (a piece of backstory fans have been curious to see since its side-mention in the original Star Wars), in order to secure a future for him and Qi’ra, only for Qi’ra to betray him at the film’s climax.

Qi’ra herself is this multi-dimensional character that these films thrive off of. She’s not a character driven by specific beliefs or ideals, like Luke Skywalker or even Rey. She just does what she can to survive. There’s a concealed sadness that’s truly felt with Clarke’s performance; a recognition of the values she’s sacrificed, but also a knowing she’d be dead if she hadn’t. It’s compelling to see the film always wrap you up into believing she’ll do the right thing, even if her development as a character will obviously not allow her to do that.

The rest of the ensemble also bring their best to this space-adventure remix of a crime caper; Donald Glover as a young Landon Calrissian is inspired casting, Phoebe Waller-Bridge brings her classic sarcastic wit to the rebellious droid L3-37, and Woody Harrelson brings the cool as a very Woody Harrelson bounty hunter.

However, the character who instantly stands out is Enfys Nest (Erin Kellyman), who starts as your average Star Wars masked antagonist but a late-game twist reveals a whole new dimension to both her and the world of marauders in the Star Wars universe that sets up the hopeful ideals of the original Star Wars within the morally grey story of this world.

Like the film states in its opening titles, “on these mean streets, a young man fights for survival, but yearns to fly among the stars,” Solo is a film that begins in the gutter, but shows that the heavens are no better. With muddy battlefields and underlit gambling hideouts, the film offers a new dimension to the world of “wretched hive of scum and villainy” (as Obi-Wan puts it in the original Star Wars) by bringing it to life through the lens of a seedy, noir thriller.

It serves as a cautionary tale of losing more of yourself and your beliefs as you try to make it in the galaxy. All this, while providing thrilling space-western action sequences. A heist aboard a magnetic train hurtling through the snowy mountainside? Hell yes. Not to say Solo is what Lucas had in mind for stories that’d expand upon his universe and his aesthetic, but it’s definitely the type of story you’d believe exists outside the confines of the Skywalker Saga.

Solo: A Star Wars Story is available for purchase on Google Play Movies and iTunes PH.