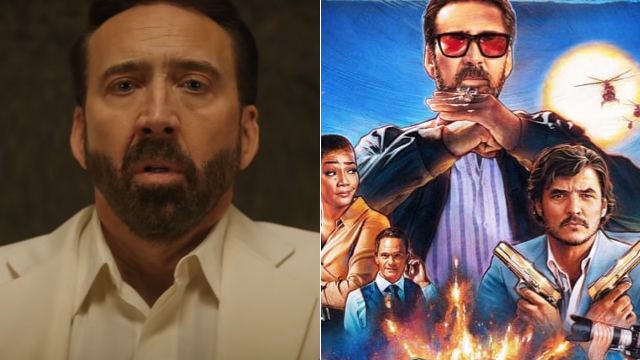 Featuring a scene where Nick Cage makes out with a younger version of him.

(SPOT.ph) We’re living in the Nicolas Cage Renaissance era, folks. With recent outings such as the vodka-induced, violent nightmare that is Mandy and the deconstructive, culinary revenge drama Pig, the prolific actor known as Nick Cage is showing to general audiences that he’s back!  To loyal fans who have always kept a close eye on his wacky but captivating performances though, he’s never really gone anywhere.

This brings us to Cage’s new film out in cinemas right now The Unbearable Weight of Massive Talent. In the film, Cage stars as himself as he attends a birthday getaway of a rich Spanish businessman (played by Pedro Pascal) who is a die-hard Nick Cage fan and wants to pitch him a screenplay. Only, things get a little tricky when said businessman is revealed to be in the upper echelons of a drug cartel.

The new action-comedy feels like it’s being told from that one friend of yours who is a huge Cage fan and wants you to get in on the action as well. You’d do well to listen to them if you’re looking to head back to cinemas for a film that doesn’t feature comic book superheroes, because The Unbearable Weight of Massive Talent is a total blast to be had.

Here’s why you should watch the new Nicolas Cage film The Unbearable Weight of Massive Talent:

Now, there are three stages in the life cycle of a Nick Cage fan. The first is when you’re a kid and you just find Cage that cool adult from National Treasure, Sorcerer’s Apprentice, and maybe even Kick-Ass (depends on how messed up you were as a kid). As a teen, you then find out about all the Nicolas Cage memes and ironically call Cage the “greatest actor of all-time” based off his over-the-top performances in Wicker Man, Ghost Rider, Vampire’s Kiss, and Deadfall.

As an adult, you realize that he’s truly the greatest actor of all-time after watching Adaptation, Raising Arizona, and Bringing Out the Dead. His new film is self-aware enough to fall in the adult stage of a Cage fan, but it pays tribute to all the stages in life that have made us fall in love with the actor.

The film plays less into Cage-the-meme and more into Cage-the-eccentric-but-deeply-interesting-actor.  The plot begins with Cage just going about his day as a workaholic actor trying to land gigs in Hollywood. It features many throwbacks to iconic Cage performances but used in an interesting way to depict Cage's internal struggle throughout the film.

Next, we're whisked off to the Balearic Islands in Spain and are treated to a surprisingly wholesome buddy hangout/bro-mantic comedy sequence between Cage and Pascal. Just two dudes drinking and sunbathing on a tropical island, talking about German experimental film, and crying over Paddington 2. Honestly, every film bro's dream.

It's endearing because this segment of the film never invites you to laugh at them for being unabashed film nerds—like what a lesser film playing into the Cage meme would probably do—and instead makes it serve as the emotional hook for the story going forward.

And the story just gets wilder from there. Cage gets to flex his acting muscles as he goes double-agent for the CIA, then even goes triple-agent after a while, and at one point has to balance all that while tripping on LSD. There's truly no actor giving performances with this amount of layers other than Cage.

As Abed from Community put it, "Nicolas Cage is one of pop culture's greatest mysteries." And while this is true to a certain extent—as his method and choices are definitely constantly surprising and groundbreaking—this film lays it out in simple terms: Cage is just a dude who loves movies and getting to work as an actor. No pretense behind it, and that's why we love him.

The Unberable Weight of Massive Talent is now playing in PH cinemas.