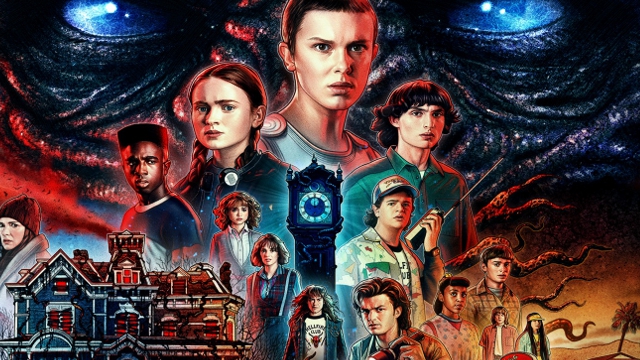 And tell us what it was like working with the Freddy Kreuger himself.

(SPOT.ph) Stranger Things almost feels like a product of a different era at this point. No, like, seriously, the last season’s release was one (still ongoing, unfortunately) pandemic ago and four Taylor Swift album releases ago. Well, the lovable kids from Stranger Things are back with their final season to remind us that they aren’t kids anymore and time is, in fact, a crazy construct affecting us all.

The stars of Stranger Things’ fourth season—including Gaten Matarazzo, Sadie Sink, Caleb McLaughlin, Natalia Dyer, Maya Hawke, Joe Keery, Noah Schnapp, and more—recently came together for a press conference and interviews for the premiere of the final season, wherein we got to ask them what it was like going into this new and final season.

Here’s everything the cast of Stranger Things 4 revealed about the final season:

“I just watched the first two episodes… and it just shocked me how crazy and scary it is,” Schnapp began the press conference with. Schnapp has portrayed Will Byers since the very beginning of the show, which famously opened with an episode titled The Vanishing of Will Byers. He continues, “when I was watching it, I was terrified for some of the parts.”

When asked how this next season differs from previous seasons, Hawke answers, “I think the party line is that it’s darker, but I think it’s also so much bigger, in terms of the relationships and dynamics.” Hawke came in as Robin Buckley in the previous season, but said she was very excited to have her character start interacting with the rest of the cast. “There’s so many storylines and interconnected details; it just feels like the scope is huge.”

Given that it’s the final season, some of the OG cast members were, of course, asked to look back on their time within the world of Stranger Things. “We all came on the show together and around the same age,” explained Charlie Heaton, who portrays Will’s older brother Jonathan. “We’ve all gone through this crazy trajectory together throughout every season and having someone your own age where you’re kind of going through the same things and understanding it really helps. And seeing the characters and where they’ve grown, as well, has been pretty impactful.”

While notably on the younger side of the cast, Sink and Matarazzo shared the same sentiments. “It really is wild, especially for the boys. You guys were very little but also just so good and talented at such a young age, so it’s amazing to watch that,” said Sink, who joined the main group as skater girl Max Mayfield in the second season.

“It’s cool watching the show when we’re so young… even the teenagers! It’s crazy seeing the whole gang grow up on this show,” Matarazzo added, before saying that he cringes only when he watches IRL interviews from the earlier seasons. Matarazzo was only 13 years old when he debuted as a main cast member in Stranger Things’ first season.

This fourth season will be set six months after The Battle of Starcourt that served as the finale of the previous season, so the audience will be meeting the characters at very different places in their lives. Matarazzo argued that audiences will be very interested to see how the characters have changed, saying:

“It’s really fun to always have that bit of a time jump in between seasons. There’s always a good chunk of time that we don’t get to see as audience members, but you figure out a lot about it in the early episodes of the show. Primarily what we’re going through, especially the kids, is that we’re starting high school without a good chunk of our friend group. […] It’s a very transitional time for us. We’re struggling with dealing with regular things like fitting into a new social climate, but also cope with everything that’s gone on in the past six months.”

The first episode will be a spicy one in particular, said newcomer to the cast Joseph Quinn who plays Eddie Munson, a senior Dungeons & Dragons player that the group interacts with. Quinn cited that it’s all in the relationship dynamics between old and new characters, saying:

“The Duffers are brilliant at establishing all of the new characters very, very quickly and you kind of know who they are from the first scene. […] They brilliantly take these new energies and throw them into this already very dense character broth, which is working and alive. […] [My character’s] quite chaotic. He’s kind of this Cayenne pepper; a little bit spicy, a little bit ‘do I want that in there?’ Divisive, I guess.”

When Quinn, Hawke, Dyer, and Keery were asked if they have a favorite character on the show besides their own, Quinn gave a straight-forward and unabashed “no.” Keery laughed but expounded, “we all just got the episodes and started watching, and I think collectively everybody is very excited for the world to see [Quinn’s character Eddie Munson].”

During the junket interview, we here at SPOT.ph got to ask Hawke about whether the overwhelmingly positive fan reaction to her character’s introduction in the previous season informed her approach to the character in this season. She replied:

“Every morning before I film, I actually have a full Zoom panel where I just speak to fans and they encourage me. I take both their acting and performance notes,” Hawke said jokingly. “No, it’s been awesome! I feel super lucky. I was really nervous about it actually, because whenever you join a beloved environment, it’s always possible the fans will be like ‘we don’t like this new character! Give us more screentime with the people we already love!’ and I’ve definitely felt that way watching shows before, when they bring on a new storyline, so I’m so grateful the reaction has been positive.”

On the flip side to that, we have Sink and McLaughlin’s characters, who seem to not be having the greatest time processing the traumatic events of last season’s finale. On the relationship between Max and Lucas, the two replied:

“I think we just find Max and Lucas in very different places in their lives,” Sink started off. “Max is in a lot of pain and, in typical Max fashion, she doesn’t want anyone to know it. Having someone like Lucas, who is extremely caring and is able to see her in a way that a lot of people can’t, I think that’s really scary for her, but Lucas, you know, he just cares too much!”

McLaughlin echoed the same thoughts, saying that “their separation has put Lucas in a vulnerable place. I feel like he’s given so much to Max; his life and his time. Max is his happiness, his friend, and when that’s not there and he sees the things she’s going through, he’s kind of lost as well. He feels her pain.”

Are you crying like we are? A lot of internal conflict within the group will need to be sorted out next season, which will be especially difficult given that they split up at the end of last season. We asked McLaughlin what he finds interesting about this new dynamic, which affects Lucas greatly, especially as he’s depicted in trailers to now be part of the school’s basketball team.

“It’s interesting because it reminded me of myself in a way. Growing up in the industry, I’m able to be a kid but I’m still doing adult things, so I’m still trying to find myself in that world. Lucas is trying to find himself in the D&D, AV Club, and the Hawkins group world, so I felt Lucas was going through a ‘mid-life crisis’, so he’s stepping out to see ‘maybe he likes doing this’ or ‘maybe he wants to do something else’. I feel like he’s trying to figure himself out and see where he fits in; see if he fits in with the nerds or the jocks. I think it’s a good moment for him, something a lot of teenagers go through, which is a lot of things teenagers don’t speak about.”

McLaughlin went on to confirm why Stranger Things is helpful for kids, saying that “I feel like a lot of kids can relate to this. Maybe they can actually feel like ‘oh wait, maybe I wasn’t doing the wrong thing.’ People do make mistakes. People don’t exactly know who they are at such a young age. I’m still finding out who I am, I’m still learning who I am and who I want to become.”

And finally, the pair of Hawke and Dyer got to speak about what it was like working with the legendary horror film actor Robert Englund, who portrayed the infamous Freddy Kreuger in the Nightmare on Elm Street series. Dyer started off by saying that the opportunity was “so cool. I mean, watching him do what he does was incredible. And [he’s] such a kind person.”

Hawke continued, saying “for me, it came at a moment where I really needed to be re-grounded in the show, even just personally. I just needed to get my feet back on the earth and my mind back to really being rested in the environment. And he just came in with such integrity and investment and care and had done such beautiful work on his monologue. I really loved getting to watch him act and it felt like a real inspiration. It made me hope that someday, [when] I’m older and I’m acting and I come into do however much time in a new environment, I come in with that amount of integrity and care.”

Wise words all-around from actors who are just at the beginning of what looks to be incredible journeys. We definitely can’t wait to check out what new lessons will be learned and what new secrets will be uncovered in this final season of Stranger Things.

Stranger Things: Volume 4 drops on Netflix on Friday, May 27.