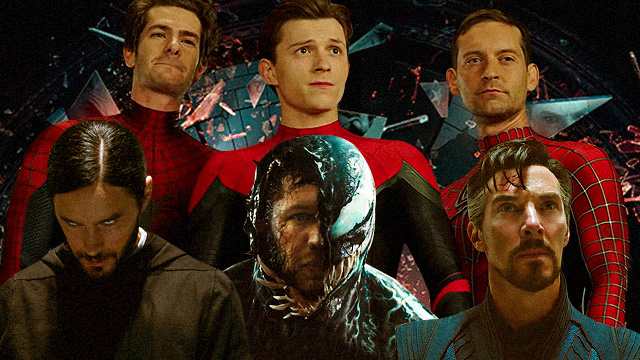 Wait, Why Are There So Many Spider-Man Universes Again?

Breaking down why Marvel can't use some of their characters in movies.

(SPOT.ph) Picture this: you’re on a date watching the latest Marvel movie (because what else is playing in cinemas anymore?). You’re watching Morbius; Michael Morbius (Jared Leto) appears on screen and you whisper to your date, “That’s Morbius.” Not a very compelling showcase of knowledge there, sorry to say.

Want to impress your date, friends, and even family with your Marvel movie knowledge? Let’s go down this rabbit hole that explains why there are so many different movie universes for Marvel, Spider-Man, Venom, the X-Men, and more. For some reason, the answer involves a company going bankrupt, a recent threat of war from North Korea, and a drunk Tom Holland phone call.

Also read: What the Morbius Post-Credits Scene Means For the Rest of the Spider-Verse

Here’s a breakdown of why there are different Spider-Man’s in the Sony Marvel Movie Universe:

It may be surprising to some, but Marvel almost went bankrupt in the 1990s due to diminishing sales in the comic book industry. To save themselves, they sold the film rights of some of their most popular characters to different Hollywood studios.

Spider-Man, all his villains, and other Spider-related characters were sold to Sony Pictures, along with Ghost Rider. The X-Men, Fantastic Four, and Daredevil were sold to 20th Century Fox. The Hulk was sold to Universal Pictures and Blade was sold to New Line Cinema.

With the film rights to popular characters now dispersed among well-established and well-oiled studios, then came the boom of film adaptations of these characters throughout the 2000’s. This is why you saw series like Sam Raimi’s Spider-Man trilogy starring Tobey Maguire and the X-Men franchise starring Hugh Jackman, Patrick Stewart, and Ian McKellen gain popularity around that time.

There were other films starring Marvel characters that came out, such as the Wesley Snipes Blade trilogy, a Nicolas Cage Ghost Rider, a Ben Affleck Daredevil film, and an Eric Bana Hulk film. All these Marvel films came out around the same time, but didn’t display the level of inter-connectivity that we see from today’s Marvel Cinematic Universe because all the characters belonged to different studios.

However, Marvel Entertainment still kept the rights to a lot of their characters, including Iron Man, Thor, Captain America, and Ant-Man, who all just so happen to form the line-up of the then-somewhat popular comics team, the Avengers. Marvel had set up their own studio to create a line-up of solo superhero films that’d lead up to a crossover film starring the Avengers team and, well, we all know how that turned out.

In 2012, Marvel’s The Avengers came out and became the then-third highest-grossing film of all-time, but at this point, all the other studios were struggling. Fox was still trying to gain back fan favor after the negatively received X-Men: The Last Stand in 2006 and X-Men Origins: Wolverine in 2009, while Sony was fixing to reboot their Spider-Man franchise after a lukewarm reception to Spider-Man 3 in 2007.

All the studios wanted to get in on that Avengers crossover team-up money, so what do they do? Fox crossed over their old X-Men cast with their young X-Men: First Class cast in 2014’s X-Men: Days of Future Past, while Sony placed their bets on building up a movie featuring a team of Spider-Man supervillains: the Sinister Six.

They tried to do this via Andrew Garfield’s The Amazing Spider-Man series, wherein they introduced the Lizard in the first film then went all out and introduced Green Goblin, Electro, and the Rhino as antagonists in the second film, with teases towards the Vulture and Doctor Octopus on the way.

No, the critical reception for The Amazing Spider-Man 2 was not good, with critics noting that the film felt too bloated with plotlines, most of which were to set up future stories. This resulted in the Amazing Spider-Man series and its possible spin-offs being put under major internal review, even as they pushed forward with a 2016 release for a third film.

However—and you’re not going to believe this—everything changed when Seth Rogen released a new raunchy comedy film in December of that year. The film was called The Interview, which featured Rogen and James Franco playing journalists who attempt to assassinate North Korean Supreme Leader Kim Jong-un (played by Randall Park in the film), and it was produced and distributed by Sony Pictures.

Putting it mildly, North Korea was not happy with the idea of that film coming out. After an official threat of action by North Korea against the United States, the North Korean cybercrime group known as the “Guardians of Peace” (because all the other villain team names were taken, I suppose) also hacked Sony Pictures and leaked a bunch of confidential emails and documents onto the internet, and this—of course—included Sony’s plans for the Spider-Man movie franchise.

And—also putting it mildly—the Internet was not happy with what they saw in the emails. Some definitely out-of-context pitches were leaked, revealing Sony executives wanted to do “cool,” “modern” things with Peter Parker, such as Snapchat and other social media gimmicks. It also listed the mandate that Spider-Man must be white and straight. Additionally, for some reason, some exec also pitched a standalone Aunt May film.

However, a positive tidbit that caught the eye of fans was that Sony did have conversations with Marvel Studios to incorporate Spider-Man into the Avengers universe. The plans laid out in the emails didn’t come into fruition, but the mere possibility that talks were happening riled up fans (who were now seemingly over the Amazing Spider-Man universe) to campaign for Spider-Man to be brought into the MCU.

Don’t say corporations never listen to fans online, because just a couple months later, in February of 2015, Marvel announced that an all-new Spider-Man would be joining the Marvel Cinematic Universe. The initial deal included the new Spider-Man’s debut in a MCU film (which turned out to be Captain America: Civil War), two solo films, and his appearance in the two Avengers films, Infinity War and the then-untitled Endgame.

And voila, that’s how we got Tom Holland.

The Holland years were going smoothly until the initial deal between the studios ended with the release of Spider-Man: Far From Home in 2019, which meant the studios had to renegotiate to further collaborate on Spider-Man stories.

At this point, Sony Pictures proved success on their own with the Spider-Man-less Venom film starring Tom Hardy and the animated Into the Spider-Verse, while Marvel Studios was swimming in cash after the back-to-back releases of Infinity War and Endgame, so the two studios were reportedly playing hard to get.

The deal eventually fizzled out, with the two studios deciding to part ways. If you remember, this’d be around the time you saw reports in Summer 2019 saying that Spider-Man was no longer appearing in the MCU. This phase didn’t last long, however, because like any soon-to-be ex, Holland got drunk one night and called then-CEO of the Walt Disney Company Bob Iger to continue trying to make the deal work, and wouldn’t you know it. They made it work.

That’s how we got Spider-Man to appear in a third MCU film, Spider-Man: No Way Home, which was deliberately designed to open the multiverse so that Sony could figure out a way to create a direct connection between their other films and the more-popular MCU.

Sony used this to establish that these aren’t the same universe, but they can easily jump from one universe to another now (or to put it another way, when they need the crossover money).

That’s really the bottom line of this whole story: characters that bring in the money. All the way back to the 1990s, when Marvel sold their characters off to stay afloat, up until today, where you can see Doctor Strange meet Doctor Michael Morbius on the big screen. Does it make sense? Probably not, but who cares? It’s Morbin’ time.