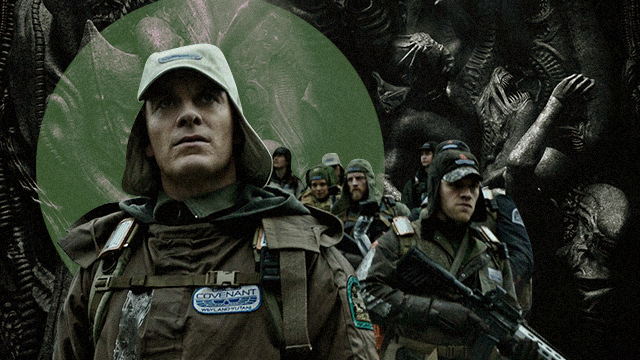 What Can Be Learned About God and Faith While Watching Alien 3 and Alien: Covenant

Finding God at the ass-end of space.

(SPOT.ph) For over 40 years now, we’ve known that “In space, no one can hear you scream.” And we've got the terrifying extra-terrestrial known as the Xenomorph of the long-running Alien franchise—one of the most recognizable figures in both the sci-fi and horror genres—to thank. While it unfortunately doesn’t seem that we’ll be getting new Alien films anytime in the near future, this year marks the 30th anniversary of Alien 3 and the fifth anniversary of Alien: Covenant.

Now, the Alien franchise hasn’t had the greatest track record with positive audience reception, and Alien 3 and Covenant definitely fall into the bottom tiers of the casual fan’s ranking of the series. Interestingly, these two films are also the most textually religious films of the series (besides Covenant’s predecessor Prometheus). While still far from misunderstood masterpieces, these films deserve a retrospective second-look, outside the realm of “is this a fun Alien movie?”, as you may just uncover its insight into salvation and faith in the divine.

Alien 3 came out in 1992 as a follow-up to the success of Ridley Scott’s sci-fi horror Alien in 1978 and James Cameron’s sci-fi action flick Aliens in 1986. For context, the film’s production was described as a literal hell, as the studio was chasing a release date with about 10 different writers all drafting different plots for the film… as the movie was already filming.

You may not know it—and he certainly wouldn’t want you to—but the film was the directorial debut for one David Fincher, known today as the mind behind The Social Network, Mindhunter, Zodiac, The Curious Case of Benjamin Button, and more. This was Fincher’s first feature film, as he had only directed music videos prior, and he absolutely hated it. Fincher said in 2009, “No one hates [Alien 3] more than me.”

And you can feel this hatred and sense of soul-sucking dread while watching the film! There’s this pungent sense of defeat that permeates every establishing shot of Fury 161, the desolated and lonely prison planet the film is set in. It’s a “maximum security” prison home to 2 custodians and 25 prisoners, who serve as workers in the planet’s industrial foundry and who are only visited every few months for a food supply by “The Corporation.”

The prisoners have accepted their punishment and have come to terms that there will be no future for them outside the daily labor on the planet, yet they’re never made privy to the fruits of their labor. Is there a point to working as a prisoner other than just to get through the day? Does the labor produce anything for the Corporation’s use off-world? These aren’t even questions that go through the prisoners’ minds.

It would be incredibly nihilistic, if not for the prisoners having “found God at the ass-end of space.” Through this lens of faith, we get a couple scenes where characters espouse how they’re resigned to having no future but introspective of their past; the decisions that led them to their self-sentencing. What the film presents is a purgatory, where there’s no salvation or damnation. Just endless nothingness to ruminate on your past.

Enter the Xenomorph. While the first film followed the universe’s blue-collar workers being left to die at the hands of just one stowaway alien and its action-packed sequel followed the heroic mission of the galactic marines to kill the Queen of the aliens, the third film focuses on hopeless prisoners and the outcasts of society coming back to life to fend off one malignant terror.

The film returns the Alien series to its roots of ill-equipped individuals being stalked in the dark by a singular killing-machine. Even the walls and architecture of the prison seem to evoke H.R. Giger’s bio-mechanical design of the Xenomorph itself, making it incredibly hard to track. Note the scene where Ripley (Sigourney Weaver) yells at an exhaust pipe, thinking it's her arch-nemesis, the Xenomorph.

“You’ve been in my life so long, I can’t remember anything else,” says Ripley before sacrificing herself (in an arms-stretched-out Jesus pose) after finding out she’s been impregnated with an alien herself. She refuses to give birth to what is in her mind the Antichrist, who will only bring the end of humanity if brought back to Earth.

She’s proven right 25 years later in the most-recent installment of the series, Alien: Covenant. Covenant, and its predecessor Prometheus, are a prequel duology to the original Alien series and chronicle the origin of the Xenomorphs. One of Prometheus’ main characters, David (Michael Fassbender)—a sentient android with major daddy/creator issues—now plays the role of main antagonist and the official creator of the Xenomorph species that we see in the original Alien series.

Prometheus ended with David witnessing his human master/creator—who himself was obsessed with finding the creator of humanity and consequently the purpose of life—get murdered by the very alien species that created the humans, as they realized that humanity was just a mere misstep in their scientific endeavors.

David learns that humanity’s purpose is not to be found in its creators, but that its purpose is to create, which he undoubtedly came to the conclusion to due to a fascination with women, primarily Elizabeth Shaw (Noomi Rapace) from the previous film. However, this makes David unknowingly fundamentally flawed as well, because like his master, he too is obsessed with creation.

David’s scenes in the film prove to be some of the most interesting of the entire series and Fassbender establishes David as one of the best cinematic villains of the 2010s. David’s mission in Covenant to eradicate his creator’s creators and also create for himself the perfect species that’s better than humans (i.e. the Xenomorph).

His test subjects? The crew of the Covenant, a ship containing an ensemble of characters that are all couples searching for a new planet to start their colony, which echoes the connection to Noah’s Ark from the Bible—only, these characters don’t find salvation in the end.

To be blunt, these characters actually meet some of the most brutal and bloody deaths of the series, and the film seems to find some maniacal entertainment in it too, as it painfully lingers on desecrated corpses and character deaths a little too much for comfort.

Like Alien 3, Covenant is also brutally nihilistic, except that it’s set on a planet rich with lush vegetation, despite harboring no life forms. It’s a nice contrast to the desolated planets depicted in the rest of the series, but it’s also serves to prove what these two films can come together to evoke, which is that we are the creators of our own personal hell.

Whether it be Ripley not finding any internal peace after encountering the Xenomorph or David’s whole worldview coming together after he meets “God” who hates his creation for no good reason, it’s clear that salvation and damnation are up to us. You decide whether the world your mind lives on is a prison or a sanctuary. What happens next is of your own making. “Look on my works, ye mighty, and despair.”