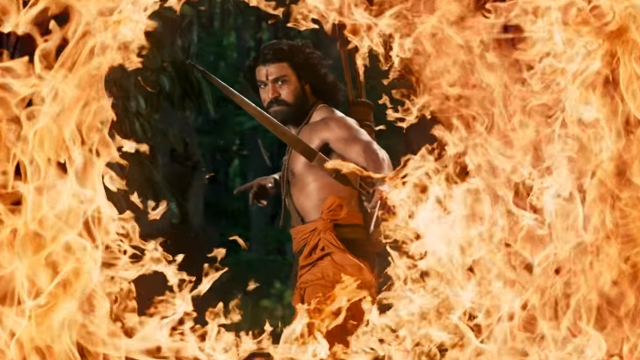 Insane Movie Alert: This Indian Action Epic on Netflix Shows What It's Like to Unlock 100% of Your Brain

Featuring an army of jungle animals and dance battles.

(SPOT.ph) At this point, we all mostly know how Hollywood action films play out. The hero (usually played by a blonde, white dude named Chris) is going to encounter a villain who somewhat has the same worldview as them, only they’re a bit too violent, so the hero has to put a stop to them. Along the way, they enlist the aid of some talking, animated character as well as make meta references as comic relief, so the audience knows not to take the plot so seriously. Also, the finale usually involves a beam of light that shoots up into the sky.

Tired of the same, old formula from Western blockbusters? Netflix surprisingly delivers the saving grace on this one, as they’ve just provided the international release of the acclaimed Indian action-epic RRR onto streaming. The film stands out more than your usual blockbuster spectacle because it simply asks the question: what if every scene of a movie went as hard as humanly possible? You should check it out on Netflix immediately.

RRR, which stands for “Rise, Roar, Revolt,” begins when a child from a forest tribe is taken away by British colonial officers. The tribe’s protector Komaram Bheem (N. T. Rama Rao Jr.) vows to locate and rescue her. On the flip side, Rama (Ram Charan) is an Indian revolutionary undercover as a British officer and he volunteers to put an end to Bheem, in order to further infiltrate the higher ranks. As fate would have it, the two men cross paths but are unaware of each other’s identities, so the two warriors immediately become the best of friends.

The three-hour-long epic is packed with insane, fiery action sequences and musical numbers that are bursting with life. The film takes care in its time developing the two men’s friendship, so you truly feel the heartbreak when they inevitably discover each other’s true motivations. All the action presented in the film is over-the-top and fantastical yet grounded in a sincere bond between two people, the likes of which haven’t been seen in an epic blockbuster since perhaps the 2000’s Lord of the Rings trilogy.

Just to give you an idea of how insane the action flick goes: it begins with a disclaimer stating that no animals and birds were harmed in the making of the film and that the “horses, oxen, birds, tigers, wolves, bears, leopards, deer, fish, and snake that you see in the film” are all CGI. It’s almost unreal that a disclaimer could elicit that much hype for what’s to come.

It’s a bit of a shame we won’t be able to experience RRR on the big screen (in its original Telugu language as well, as the Netflix release is dubbed in Hindi), but at least India’s biggest blockbuster is now easily accessible to the rest of the world.

RRR is now streaming on Netflix.