Why the Old Movie Is One of the Best Modern Horror Films
Loading
Already a member? Log in
No account yet? Create Account
Spot.ph is your one-stop urban lifestyle guide to the best of Manila. 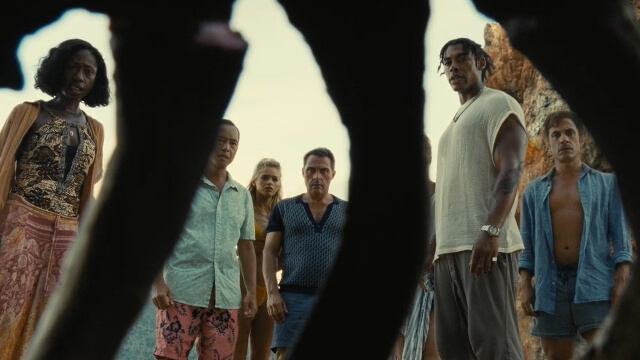 Spot Hot Takes: Old Is One of the Best Modern Horror Films

(SPOT.ph) Have you ever held the specific type of anxiety that makes you feel like you’re hurtling forwards towards a brick wall, without any escape whatsoever in sight? No need to get into the specifics of what exactly caused you to feel this way. There is a long list of crazy, unknowable aspects of our existence that can conjure up these feelings within us, if we just stop to think about them just a little bit.

Another item we can add to that list? The film Old from director M. Night Shyamalan, who perfectly captures that dreadful feeling of speeding uncontrollably towards one’s inevitable demise, in a neatly packed two-hour horror film about people out at the beach. And, oh look, it’s finally now streaming on HBO Go.

Released last year, Old is a film that centers on a tourist group that book a trip to a secluded cove, where they realize a bit too late that their aging has sped up rapidly since setting foot upon the mysterious beach. Panic then starts to spread amongst the group, composed of kids, adults, and the elderly, when they discover that they’ve been shut out from their only exit route away from the beach.

After notable lackluster outings such as The Happening, After Earth, and, yes, The Last Airbender, this film is a continuation of Shyamalan’s recent Renaissance (a “Shyamalan-issance,” if you will) with low-budget but compelling horror-thriller flicks, such as the found-footage horror The Visit, the Dissociative Identity Disorder thriller Split, and the superhero mental asylum film Glass.

The film kicks off with a deliberate first act that wastes no time in charting out all the characters and how they arrive at the beach where we’ll be spending almost the entirety of the film at. Shyamalan plants oddly specific lines of exposition in this opening act that make you think you know where the film is headed, before the second act shifts gears and turns the film into a murder mystery of sorts.

It’s classic ensemble film magic. Have a cast of easily stressed out characters trapped in a singular location, then throw a dead body into the mix. In the case of Old, the cast is comprised of a married couple about to tell their barely 10-year-old kids that they’re going to get a divorce, an Asian-American nurse and his African-American wife who has epilepsy, a racist doctor and his elderly mother, an Instagram-obsessed mom and her baby daughter, and a rapper named Mid-Sized Sedan. We could honestly even just watch a film about this group where the shit doesn’t hit the fan and they’re all just sort-of forced to spend a vacation with each other.

But hit the fan, the shit does, when the film stabs its characters with its sci-fi and horror intentions. The kids turn into teens and a couple characters die due to rapidly developing health issues, all of which force the characters (and us along with them) to grapple with the horrors and grotesqueness of aging.

From the parents looking in horror at their kids who’ve hit puberty and somehow have morphed into different people, to the literal bones snapping and body disfiguration of the one character whose whole deal is making sure her body looks beautiful and healthy, Old jams about 60 years of a person aging into a day and makes something inevitable within our bodies look like the most excruciating and abnormal process ever.

There’s a real, fall-out-of-your-seat moment early on into the panic, when Kara (who steps onto the beach as a six-year-old) accidentally gets pregnant as a “teenager,” when she and Trent (Alex Wolff) suddenly develop hormones out of nowhere. The reveal is played for shock value—just great entertainment for an insane movie.

However, pulling back things into perspective, it’s also revealing that this isn’t how most would view teenage pregnancy if it happened in real-time. Most would see people who are now capable of making adult decisions, when the reality is that the issue deals with literal children who still need to figure everything out. Not that the film is actively making any heavy-handed social commentary about this. It’s a simple reveal that plays well into the thrill ride of the film, which in turn also peels back more layers of the film’s central themes, of humans navigating time.

The characters have to grapple with time and mortality in order to get a hold of the situation, but that questioning could bust down the door to a whole flurry of existential musings that lead nowhere, which the film, thankfully, bypasses by focusing on the concrete character relationships. Most of the characters push each other away, out of fear and panic or over trying to find the solution and the next step in the plan to get out. Their lifespans have been increasingly shortened, yet they still make the same mistakes people do everyday; getting swept up in emotion and the thought that there is only now to make things right.

“We never talk. We had a fight a long time ago. She’s older, but now I am. The fighting seems ridiculous now,” a sobering line stated by the epileptic psychiatrist Patricia (Nikki Amuka-Bird) later on in the film about her sister who she stopped speaking to long ago. It’s a melancholic wave of regret that seems to only wash over people as they approach their final days and years. It’s the timeless tragedy of letting one situation blow up an entire life’s worth of time shared with another person, and only pulling back from one's ego to realize it too late.

The only characters to realize that they need to find stillness before it’s too late is the central family of the film. The main couple, who never could really see eye-to-eye because of marital affairs and health concerns, learn to unburden themselves from the regrets of the past and the immaterial future by literally sitting down on a quiet beach to listen to their children.

The film asks of its audience to make peace with that there is no fighting time. It’s a difficult catharsis to come to, but it makes a case for it by presenting the alternative, which is endless panic and fighting against an abstract force of nature.

What makes Old one of "the Greats" is that utilization of shock and horror to help you navigate your own fears and anxiety, which may even help you reach those peaceful insights. The film keeps pulling out to reveal how small these characters are, in terms of age and mortality but also in terms of their place within society. A third act revelation of why the characters were put into the predicament in the first place unveils another interesting angle to human mortality and existence: big pharma.

If he hadn’t been already, the film cements Shyamalan as one of the boldest voices in modern American horror, mostly for his ability to transform a B-movie plot into a cathartic narrative that features fractured psyches and characters struggling with something so abstract, but also for inserting two whole scenes where he gets to make cameos. A true legend in the spirit of Alfred Hitchock.