Anne Curtis doesn't lip-sync, says it's okay as long as you admit you're not a singer
Loading
Already a member? Log in
No account yet? Create Account
Spot.ph is your one-stop urban lifestyle guide to the best of Manila. 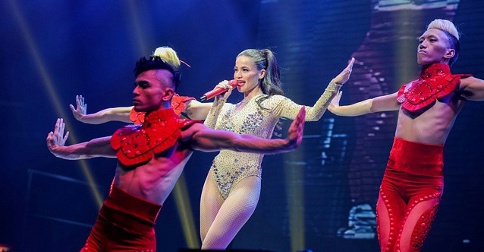 Anne Curtis doesn't lip-sync, says it's okay as long as you admit you're not a singer

Yes, this is still about the non-singers issue.

(SPOT.ph) It's been well over a week since Rhap Salazar tweeted, "I hate seeing lip-syncing artists on TV. 'Yong iba nagkaka-album pa."

Celebrities—singers and non-singers alike—have come forward to express their opinion. Gab and Gary Valenciano agreed with Rhap, Lea Salonga was for lip-syncing but on a "case-to-case basis," Vice Ganda said non-singers have the right to perform, and Boy Abunda disagreed completely.

Anne Curtis is the latest celebrity to express her reaction to the tweets. "Hindi ako nagli-lip-sync. Alam ng lahat ng tao ‘yon," she told ABS-CBN News on Tuesday. (To be fair, she's telling the truth. A lot of people can attest to that.)

She also said she wasn't affected by the tweets, but reiterated that she only wanted to entertain fans. Said fans have given the self-confessed non-singer a platinum album and sold-out concerts. "Basta aminado ka naman na hindi ka talaga singer, okay iyon," she said.

Meanwhile, Rhap took to Twitter on Monday to express his surprise at how massive an issue his comment has become. The singer, who is currently in the U.S. for the World Championships of Performing Arts, said that he will be coming home in two weeks to answer any questions.

In an interview with ABS-CBN, he said he was just explaining his side as a singer and added, "Happy naman po ako kasi kung ano man ang na-feel ko as a singer, na-feel din [ng mga nagtanggol]."

Rhap Salazar Anne Curtis
Your Guide to Thriving in This Strange New World
Staying
In? What to watch, what to eat, and where to shop from home
OR
Heading
Out? What you need to know to stay safe when heading out