Ex-*NSYNC member Joey Fatone has some brutal advice for One Direction
Loading
Already a member? Log in
No account yet? Create Account
Spot.ph is your one-stop urban lifestyle guide to the best of Manila. 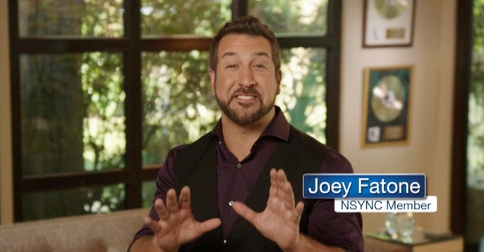 Really, it doesn't get harsher than this.

Former *NSYNC member Joey Fatone (remember him?) has some important and very brutal advice for One Direction. In a letter penned to members Harry Styles, Liam Payne, Niall Horan, and Louis Tomlinson, he predicted what was going to happen to them after their hiatus.

He hinted at Harry being the Justin Timberlake of the group, saying:

"While you’re all on hiatus, Harry will record some dope singles with Beyonce, Ryan Adams and Wiz Khalifa, come out with a killer solo album produced by Pharrell and Timbaland, cut his hair, dye his hair, do a second less-awesome album, let his hair grow super long and wear it in two braids, crush a self-effacing cameo in a Judd Apatow movie, buzz his hair and release a third, self-produced album on which he hints at being bisexual that everyone will call his 'best work.'"

The rest of them? Joey says they're "f*cked." He even name-dropped another member of *NSYNC, writing:

"Do you know what Chris Kirkpatrick is doing? Because I don’t. He’s completely unreachable. He might be managing a Best Buy in Sacramento, he might be dead. No one knows. Louis, I’m looking at you."

He compliments them on their talent but says "Harry is so, so much cuter, cooler and more talented" and ended the letter saying, "Enjoy the next few months, One Direction, because they’re your last."

Before you get too excited (or angry, if you're a 1D fan), we're going to burst your bubble and say that it's a satire article by humor website, AboveAverage.com. Apparently, a lot of people fell for it—including some news websites. Well played.

Joey Fatone One Direction
Your Guide to Thriving in This Strange New World
Staying
In? What to watch, what to eat, and where to shop from home
OR
Heading
Out? What you need to know to stay safe when heading out