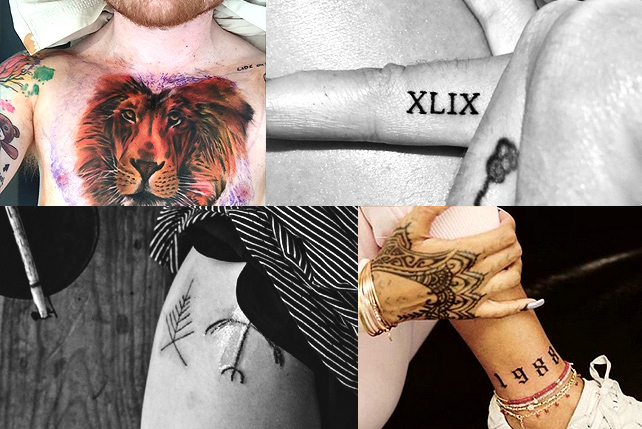 Which of your favorite celebs recently got inked? 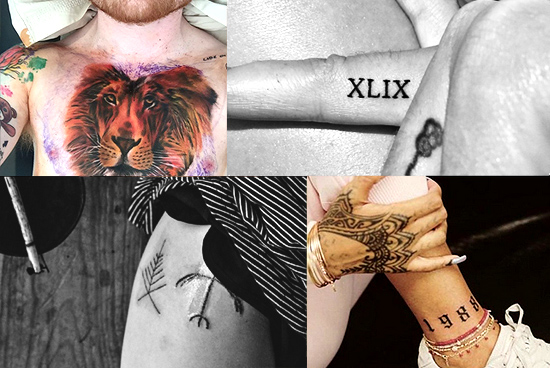 (SPOT.ph) These days, it seems as though everyone is taking the plunge and getting a tattoo. Even your favorite celebrities are getting in on the fun, debuting new tattoos left and right—so much so that it's hard to keep up with all of them. We round up a list of the latest celebrity tattoos; you'd probably be pretty surprised at some of them.

Singer Ed Sheeran trolled everyone in August when he posted a photo of a massive lion tattoo on his chest, only to say that it wasn't real...then saying that he actually covered up the tattoo with makeup. So yes, it's still there. When he received a lot of flack for his tattoo choice, he defended himself, saying, "If it was black and white saying a clever phrase in a language I can’t speak no one would’ve said anything." Good point.

In August, Rihanna debuted a new tattoo on her ankle that said "1988" or the year she was born. This is just one of her many, many tattoos, which include a gun on her ribcage, the words "shhh" and "love" on her fingers, and the Egyptian goddess Isis across her chest.

In an April interview with James Corden for The Late, Late Show, Kristen Stewart revealed that she recently got a tattoo to commemorate her award-winning role in the film, Clouds of Sils Maria. She didn't explain what the eye-shaped design meant, but she said that getting inked was a bonding experience between her and her mom. 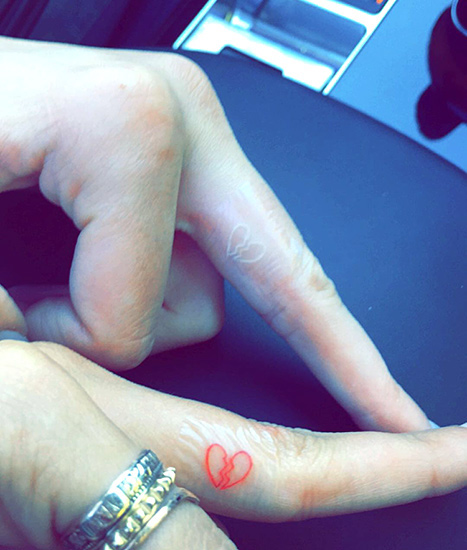 Supermodel Kendall Jenner seems extra-mindful with her tattoo choices. Earlier, she got a barely visible white dot on her middle finger that supposedly "represents the little things that matter." In August, Kendall and her best friend, Hailey Baldwin, got small, matching broken heart tattoos on their middle fingers. Hailey took a photo of their new ink via Snapchat.

In December 2014, Rhian Ramos took a trip to Kalinga and got inked by Apo Whang-Od, a traditional tattoo artist from the province. She got two tattoos on her thigh: a hawk or "batuk" and the tribe's symbol for "scorpion."

Chris Brown always seems to raise eyebrows with his life choices in general, so this...uh, artwork on his head shouldn't come as too much of a surprise.

Cara Delevingne, a self-confessed tattoo addict, has an impressive total of around 18 designs on her body. One of her more recent tattoos is a tiny coat of arms on her left ribcage, presumably to represent her family name. She also got an "AC" tattoo on her finger, which is rumored to be the initials of her girlfriend, musician Annie Clark.

In April, Ariana Grande kept it simple with a new crescent moon tattoo under her left ear. She has three other tattoos, including one on her nape that says "mille tendresse," a Breakfast at Tiffany's quote that signifies love.

Early this year, Katy Perry paid tribute to her halftime performance at this year's Super Bowl with a new finger tattoo that says XLIX.

Can you say #SquadGoals?! It seems the cast of the upcoming DC movie, Suicide Squad, has become pretty tight-knit. Not only did they get matching "Skwad" tattoos, but it looks like they did the inking themselves. Would you trust your friends with that needle?

Celebrity Tattoos
Your Guide to Thriving in This Strange New World
Staying
In? What to watch, what to eat, and where to shop from home
OR
Heading
Out? What you need to know to stay safe when heading out