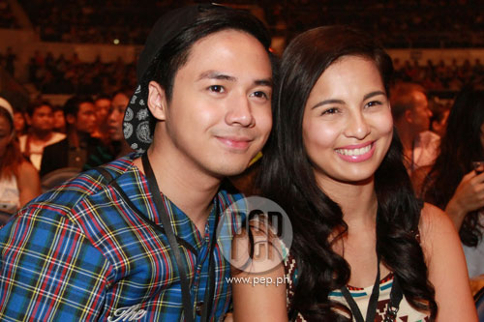 They have a new project together.

(SPOT.ph) Not even a year after their breakup was reported on The Buzz, Jasmine Curtis-Smith and Sam Concepcion are working on a new project together.

It was revealed on September 8 at the press conference of The Sandbox Collective’s No Filter 2.0 in Privato Hotel that Curtis-Smith and Concepcion would be sharing the stage in the restaging of No Filter.

When Curtis-Smith was asked about her and Concepcion becoming friends again through No Filter 2.0, she replied, “Yeah, of course, ever since naman we try to communicate as civil as possible. There’s no conflict between us.”

By “conflict,” Curtis-Smith may be referring to the tiff between Concepcion and her big sister, Anne Curtis. In 2014, a reportedly drunk Anne approached Concepcion at a party and demanded, “Ba't mo niloloko kapatid ko?” She also supposedly accused him of not being “classy enough” to be there. Anne later denied the allegations, but their disagreements are often cited as one of the main reasons why Curtis-Smith and Concepcion’s relationship failed.

But Curtis-Smith won’t be letting anything get in the way of her work as an artist, whether or not Concepcion is around: “We’re both here to work on our craft and to perform the honest truth behind all these monologues that we’re trying to send out the message with.”

Concepcion is one of three new cast members in No Filter 2.0, alongside Paolo Valenciano and Carla Humphries. Curtis-Smith, on the other hand, is returning to the show with original castmates Lauren Young, Saab Magalona-Bacarro, Mikael Daez, Micah Muñoz, Cai Cortez, Sarah Facuri, and Khalil Kaimo.

No Filter 2.0 begins its run on October 3 and ends on October 25. The show will be at the Power Mac Black Box Theatre at Circuit Makati.

Jasmine Curtis-smith No Filter Sam Concepcion
Your Guide to Thriving in This Strange New World
Staying
In? What to watch, what to eat, and where to shop from home
OR
Heading
Out? What you need to know to stay safe when heading out