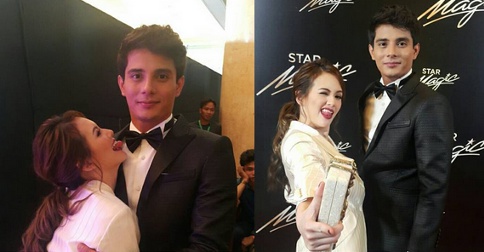 It was all caught on camera

(SPOT.ph) A party is a good excuse to get a little buzzed, but it seems Ellen Adarna took the partying a little too far.

The Pasion de Amor actress has made headlines for her alleged drunken behavior at the recent Star Magic Ball. Ellen was invited to the event by her co-star and love team partner, Ejay Falcon. According to a report from TV Patrol, she got drunk and later, ditched her date (who looked pretty alone and clueless on the dance floor). She was seen hanging around with Paulo Avelino throughout the night. The cameras even caught them holding hands at one point.

Ellen's Instagram post, where she thanked Ejay for the invite, was bombarded with comments on her behavior. Isabelle Daza, in particular, commented, "And then you ditched him" but Ellen reportedly deleted it.

One commenter said her behavior was a "turn-off," saying, "Kawawa si [Ejay] Falcon. 'Yong ginawa mo is so rude." Another one replied, "Lesson learned, [Ejay]. Next time, do not invite this piece of sh*t!"

We just have one question. How does Paulo Avelino keep winding up in these drunken situations?