Kris Aquino fires back at commenter comparing her to Imelda Marcos
Loading
Already a member? Log in
No account yet? Create Account
Spot.ph is your one-stop urban lifestyle guide to the best of Manila. 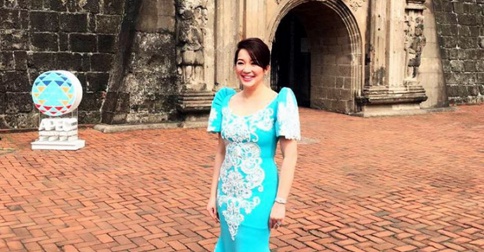 Kris Aquino fires back at commenter comparing her to Imelda Marcos

Her APEC controversy isn't over.

(SPOT.ph) You might remember Kris Aquino making headlines last week after she compared her sunburn to the horrendous traffic motorists experienced during APEC week. The host and actress has since apologized for her "joke," but that apparently wasn't enough for some people.

Late Sunday night (November 22), Kris took to her Instagram to share an exchange between her and one of her commenters, who accused her of behaving "like APEC is all about her." The commenter also compared her to Imelda Marcos, saying, "...You criticize the Marcoses for their lifestyle, ikaw din pala Imeldific [...] Sa nakikita ko, hindi sila [the Aquinos] naiiba. Mala-Marcos din, pati 'yong pagtago ng mahihirap...wearing an evening gown in broad daylight and that body-hugging yellow dress in front of Jose Rizal’s statue, oh my. Can’t get any nouveau rich and cheaper than that."

Kris hit back at the commenter for calling her cheap, saying, "I paid for the entertainment and decoration for the APEC Spouses’ lunch unlike 'yong binibida mo na nagnakaw sa Pilipinas." She said that the money came from her earnings with SMDC, a company that the commenter reportedly works for.

She also wrote, "I'll be sure to make mention of how articulate you are to Ms. Tessie Sy-Coson [the eldest daughter of Henry Sy]...she’s a textmate and take it from her, I’m not cheap at all." When the commenter accused Kris of threatening to tell on him, she denied it and answered, "...Can you blame me for being proud to be close [to] Tessie Sy-Coson—to the richest, most powerful, most hardworking, and most inspiring woman in our country?"

The next day, Kris posted a direct message exchange between her and the commenter, who apologized for his earlier comments.

Kris Aquino Apec2015 Apec Summit Apec
Your Guide to Thriving in This Strange New World
Staying
In? What to watch, what to eat, and where to shop from home
OR
Heading
Out? What you need to know to stay safe when heading out