Here's why Maja Salvador doesn't want to sit next to Alden Richards
Loading
Already a member? Log in
No account yet? Create Account
Spot.ph is your one-stop urban lifestyle guide to the best of Manila. 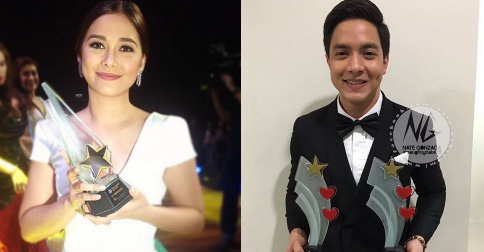 They were both present at the 29th Star Awards for TV.

(SPOT.ph) It's not often that we see stars from rival networks rubbing shoulders, so it's both fun and fascinating when we see them mingling in one massive event. Take, for instance, Alden Richards, who has been seen with celebrities from ABS-CBN, like James Reid, LizQuen, and now Maja Salvador.

Both Alden and Maja won acting awards in the Drama category at the 29th Star Awards for TV (held on December 3). While they were both waiting for the announcement of winners, Maja was overheard by PEP.ph cracking a joke that she didn't want to sit next to him, saying, "Ayoko tumabi kay Alden kasi baka ma-bash ako."

She devised a sneaky way to speak to Alden, saying, "Usap tayo, Alden, pero diretso lang ulo natin at huwag tayo magtinginan." Still, Alden—ever the gentleman—apologized to Maja for the trouble. Earlier, he caused a commotion when he arrived at the venue (above), bringing the event to a complete standstill until the crowd was controlled.

For context, Maja was likely referring to a previous instance where actress Kris Bernal was widely bashed by AlDub fans after she posted a photo with Alden. She was forced to apologize.

Also read: Look: Alden Richards and LizQuen hanging out in one event!