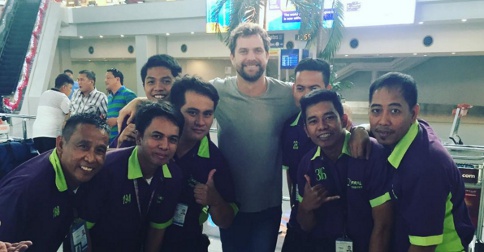 Dawson's Creek star Joshua Jackson is in the Philippines!

Here's why The Affair and Fringe star is in the country.

(SPOT.ph) Margot Robbie isn't the only celebrity who's paid the Philippines a visit this year. This time, it's former Dawson's Creek alum and current star of Showtime's The Affair, Joshua Jackson.

According to a series of Instagram posts, the actor is currently part of a trip around the world, having previously visited Japan. He also captioned some of his posts with the hashtag, #YEARSproject.  It refers to a documentary series on climate change from National Geographic Channel and Showtime entitled Years of Living Dangerously, which they are currently shooting in the country. According to the show's website, it also features several celebrity correspondents including Ian Somerhalder, Matt Damon, Jessica Alba, and Harrison Ford.

On Saturday, December 12, he shared a photo of his view from his hotel room in Manila (above), as well as another photo with a group of Pinoys who were fans of his old movie, The Mighty Ducks.

On Sunday, December 13, he posted a photo of a beachfront, presumably in Dumaguete City (according to several comments on his post). We're hoping his girlfriend, Diane Kruger, tags along soon.

Also read: Here's the awesome reason why Margot Robbie was in the Philippines

Dawson's Creek Joshua Jackson
Your Guide to Thriving in This Strange New World
Staying
In? What to watch, what to eat, and where to shop from home
OR
Heading
Out? What you need to know to stay safe when heading out