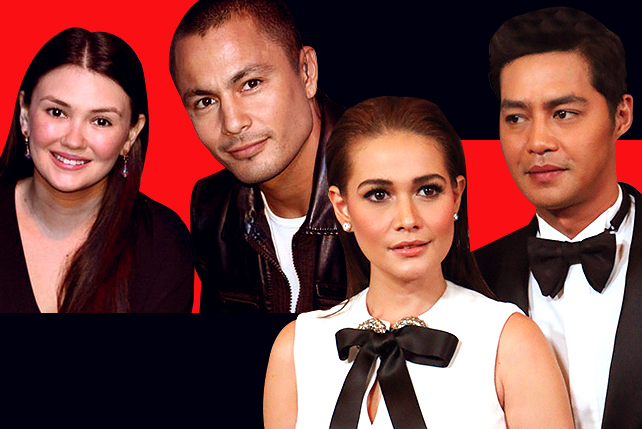 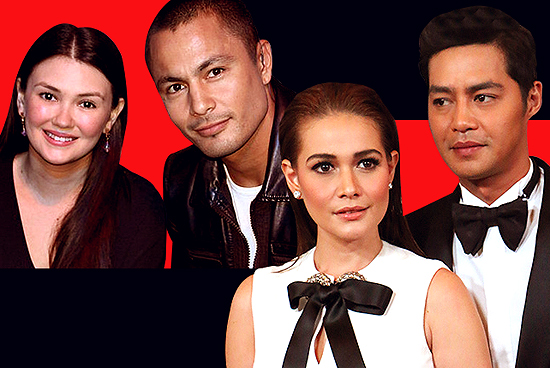 (SPOT.ph) Celebrity breakups are pretty common in showbiz, and yet the public never seems to tire of hearing every juicy detail of the split. Who broke up with whom? Why did they go their separate ways? What did this other star have to do with anything? From alleged third parties to messy and unexpected drama, we list 10 of the most shocking celebrity breakups in local showbiz.

Panday fans rejoiced when the show's two leads fell in love and boldy declared their relationship, despite the vehement disapproval of Heart's parents. Fast-forward to three years later and probably one of the most awkward breakups ever. It wasn't just their fans who were shocked at their split—even Jericho didn't see it coming. He arrived at the airport and was greeted by reporter Mario Dumaual asking for his comment. Apparently, Heart had announced their breakup over e-mail in a TV interview, and Jericho didn't think it was final because...well, it wasn't done in person.

Buzz about a budding relationship between Piolo and KC first started in 2009 when they were shooting their soap, Lovers in Paris. Piolo admitted they were couple in 2011, but their relationship soured by the end of the year. In an intriguing interview on The Buzz, a tearful KC dropped very meaningful statements like, "May mga hinahanap ako na napaka-basic lang na hanapin ng isang babae sa isang boyfriend, sa isang lalaki." Her mom, Sharon, only added fuel to the fire, when she engaged in several Twitter spats about Piolo. The three reconciled in October 2015.

In a recent interview with Boy Abunda, a tearful Zanjoe Marudo finally confirmed that he had split up with his girlfriend of over five years, Bea Alonzo. Breakup rumors weren't new to the couple; in 2015, they admitted that they were working through a rough patch. What made the split even more shocking, however, was the rumor that Bea is currently cozying up to her perennial on-screen partner, John Lloyd Cruz—which, of course, made plenty of Popoy and Basha fans happy. As of writing, he and Angelica Panganiban have yet to officially come clean about their relationship status.

Before all this John Lloyd drama, however, there was Derek and Angelica. The two dated for six years and even lived together, so fans were surprised when they suddenly broke up in 2012. Angelica, who has never been one to keep silent, tweeted fans in a Q&A where she implied that Derek had cheated on her multiple times. In a later report by PEP.ph, she told Star Studio magazine that he was a "controlling boyfriend." She also cited Derek's relationship with his estranged wife, Mary Christine Jolly, as one of the reasons they broke up. The latter was married to Derek in 2002, but their marriage was kept secret until 2014 when she filed a concubinage complaint against the former couple.

When Cesar and Sunshine's 13-year-marriage crumbled, nobody could have predicted the drama that quickly came after. Sunshine supposedly found out that Cesar had been cheating on her when she discovered that the items starlet Krista Miller has been posting on Instagram were gifts from Sunshine to her husband. She then filed a petition for annulment in 2014, but not before she accused of Cesar raping her on Mother’s Day. Last year, she also filed child abuse raps against him and accused him of "performing lewd acts" in front of their children. By the way, the drama still isn't over: on February 3, 2016, the QC Prosecutor's Office junked Sunshine's child abuse case against her estranged husband due to lack of evidence.

They were one of the biggest love teams of the '80s, so fans rejoiced when they went from reel to real and tied the knot in a lavish and highly publicized wedding. Fans thought they would live happily ever after like the characters they famously played, but it didn't last; they annulled their marriage just three years later. There was plenty of speculation about why they split up, but neither of them gave any details. In a 2008 story from YES! Magazine, Sharon somewhat alluded to the reason for their breakup, saying, "Truth be told, once we were married, he really was not the husband that I'd dreamt of."

The Kimerald tandem first started within the walls of the PBB house, and the two were immediately paired to do a long string of projects. Much to their fans' dismay, they went their separate ways in 2010. Three years later, everyone witnessed a real-life love triangle straight out of Kim and Maja Salvador's drama, Ina Kapatid Anak. Maja's newfound relationship with Gerald wedged a controversial divide between the two former best friends, and resulted in Kim crying about the new development on national television. In September 2015, Kim hinted at Gerald's infidelity, but didn't disclose the identity of the third party. Meanwhile, Maja and Gerald have since broken up but neither of them gave any reasons why.

After five years together, everyone naturally expected wedding bells for Billy Crawford and Nikki Gil. Unfortunately, things didn't end so smoothly. In an emotional interview on The Buzz in 2013, Billy blamed himself for the split but didn't divulge any details. After months of silence, Nikki stunned fans when she admitted in an interview with Cosmopolitan that he had cheated on her because of her choice to stay a virgin before marriage. He was immediately linked to his former co-star Andi Eigenmann and It's Showtime co-host, Coleen Garcia. Both vehemently denied the rumors, but fans were instantly abuzz when he started dating the latter a few months later.

We bore witness to so much of Kris Aquino's dating life that it's practically a saga of bad breakups. We're zeroing in, however, on her ill-fated affair with Joey Marquez in 2002. Despite their tumultuous romance, they soon moved in together and Kris had declared her "undying love" for Joey. What followed was a now-infamous interview with Korina Sanchez that sounded like a scene straight of a telenovela. By Kris' own account, he pointed a loaded gun at her, she threatened to crush his genitalia, and she set fire to their bed with lighter fluid. The biggest bombshell, of course, was that he had infected her with an STD.

Rico and Claudine were the biggest love team of the '90s and the sudden end of their four-year relationship broke the hearts of fans everywhere. Nobody suspected something was amiss; after all, they had just released their box-office hit, Got 2 Believe and were very lovey-dovey in public. Rumors immediately started flying that there was an unidentified third party involved (many believed it was Raymart Santiago, whom Claudine started publicly dating shortly after). Things only got worse when Rico suddenly passed away just weeks later. According to Claudine, he had promised to "fix everything" after his fateful trip to Palawan.