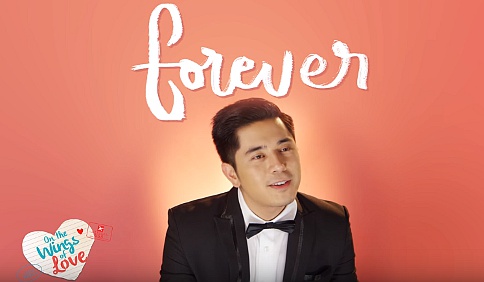 (SPOT.ph) ABS-CBN is all about love this February after they released a new station ID celebrating Valentine's Day. The video, which was unveiled yesterday, February 9, featured the stars from their roster of shows, including On the Wings of Love, Dolce Amore, Pangako Sa 'Yo, and more.

The big question sounds like something right out of a Pinoy "slumbook": What is love? Still, the stars seemed stumped at first, especially Nadine Lustre who probably felt the pressure and immediately responded, "Wait lang!" Eventually, she settled for the answer: "For me, love is unconditional."

Meanwhile, her OTWOL co-star James Reid answered, "Love is purpose." Her other leading man, Paulo Avelino, gave the reply: "It's the only feeling that could last forever."

Dolce Amore star Liza Soberano was also around for a little Q&A. Liza had a very Miss Universe answer, saying, "God created human beings to be loved and to love. To be able to feel that feeling is just wonderful."