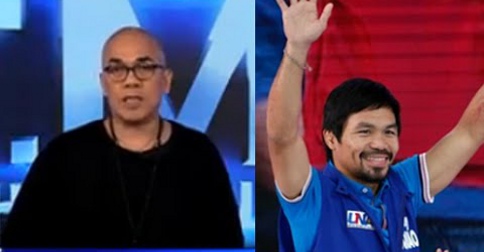 Heck, even Floyd Mayweather wasn't happy with him.

(SPOT.ph) It's been quite the week for boxer and Sarangani Rep. Manny Pacquiao. Despite an earlier apology, two companies, Nike and Wonderful Pistachios, eventually severed ties with the senatorial candidate for his anti-LGBT remarks.

His now-viral interview with TV 5 was the subject of widespread criticism both locally and internationally, with plenty of celebrities voicing their reactions. Some of them, like Lea Salonga and Yeng Constantino, are straight allies for the LGBT community. Others were notable LGBT personalities who, naturally, were less than thrilled at his statements.

Retired NBA veteran Jason Collins, the first openly gay basketball player during his active years, told Pacquiao that he "lost all respect" for him. He was one of the first international celebrities to issue a comment.

Puerto Rican boxer Orlando Cruz, who came out as gay in 2012, invited Pacquiao for a peaceful one-on-one sparring session, saying, "I invite you to meet me to get to know me as a human being first and I guarantee you that you will think differently." He also called Pacquiao's comments "irresponsible," adding, "Take care and I will be praying for you and your family."

Just hours after Pacquiao's interview hit the web, Hollywood celebrity gossip blogger Perez Hilton took to his website to call the latter's words "barbaric," as well as "horrific and damaging." In his post, he also wrote, "If your religious beliefs prevent you from accepting same-sex marriage, that's on you. That's your idea of propriety. But there's absolutely no call to demonize and denigrate gay people by comparing them to animals just because their love is something you're unable to accept."

Vice Ganda was among the first local celebrities to slam Pacquiao. In a series of tweets, he wrote, "Ang pagpatol sa parehong kasarian ay masahol pa sa hay0p? Eh ang pakikiapid habang ika’y may asawa anong kababuyan ito? Pakisagot, Manny!" He was later criticized for being a "hypocrite," as Pacquiao supporters said that Vice was no better because he infamous made fun of broadcast journalist Jessica Soho's weight. He responded by saying a comedian's joke was different from that of a politician's statement and added, "This is not about me. It is about a serious remark that affects the entire LGBT community. Don't divert the issue."

Cultural activist Carlos Celdran, who is openly bisexual and an advocate for LGBT rights in the country, previously announced that he was not voting for Pacquiao in the elections. He was one of the 1,500 people who signed the petition calling for Nike to break their sponsorship deal with the boxer.

Though NBA Hall of Famer Magic Johnson is straight, he openly expressed his support for his gay son in 2013, despite being a practicing Christian. (He says his son's sexual orientation doesn't change his religious beliefs.) He took to his Twitter account to share his thoughts after Nike dropped Pacquiao, promising he won't be watching another one of his fights.

In an Instagram post,  Liza Diño expressed her disappointment at Pacquiao, whom she called a "champion" and a "hero." She pleaded for him to stick with boxing instead of politics, and added, "After your display of complete disregard for humanity, nakakadismayang isinasaalang-alang namin sa ‘yo ang kapakanan ng bansa namin."

Diño's husband, Aiza Seguerra, had harsher words on his Instagram account. The singer and former child star identifies as a transgender male, but has no plans to undergo sex reassignment surgery just yet. However, he and Diño said they plan to start a family via in vitro fertilization.

This might sound surprising to you, but Floyd Mayweather Jr. is actually an avid LGBT supporter; he made the big reveal via Twitter back in 2012, saying, "I stand behind President Obama and support gay marriage. I'm an American citizen and I believe people should live their life the way they want." In a report by TMZ Sports, the boxer called for Pacquiao to be more tolerant of the community, saying, "We should let people live their lives the way they want to live their lives."