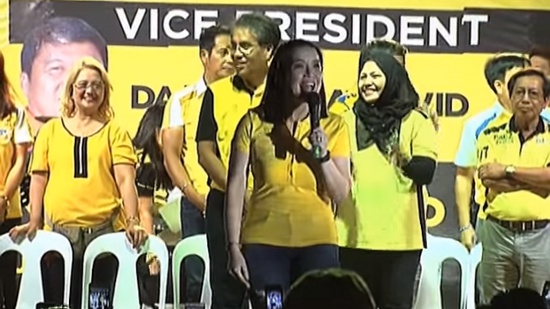 Kris Aquino asks LP supporters to defend her amid criticism

She recently came under fire for using the presidential chopper.

(SPOT.ph) Kris Aquino has finally responded to the online criticism after she was photographed using the presidential chopper for a campaign rally in Dalaguete, Cebu. The Internet swiftly accused the Aquinos of being "abusive," and using public resources for presidential bet Mar Roxas' campaign.

Earlier, President Noynoy Aquino came to his sister's defense and reminded the public that she was one of the country's top taxpayers. "Whether it is an individual taxpayer or someone who is very close to me who shared all of the burdens, I think it is just proper to share the successes. Share kami sa hirap, share kami sa successes," he said.

Communications Sec. Sonny Coloma was also quoted saying, "Members of the President's immediate family are allowed to ride with him in official government vehicles."

A few weeks ago, Kris announced on her Instagram account that she would be taking a "long break" from showbiz. Her morning show, Kris TV, aired its final episode on March 23.

Elections Elections 2016 Kris Aquino Mar Roxas
Your Guide to Thriving in This Strange New World
Staying
In? What to watch, what to eat, and where to shop from home
OR
Heading
Out? What you need to know to stay safe when heading out