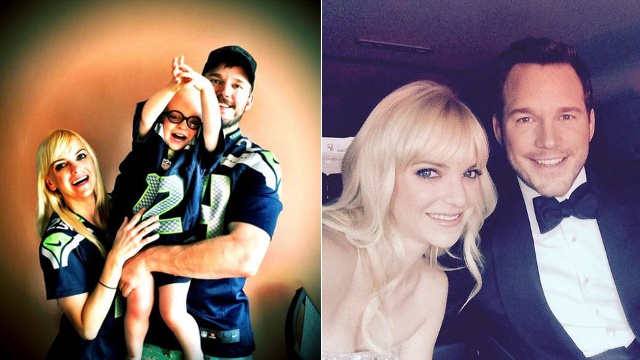 Love is dead, but we'll always have these moments. Sob!

(SPOT.ph) First, it was Brangelina who had the world mourning the end of their 12-year-relationship. And now, it's Chris Pratt and Anna Faris, who just announced their split after eight years of marriage.

A statement on the former couple's respective social media pages reads, "Anna and I are sad to announce we are legally separating. We tried hard for a long time, and we're really disappointed. Our son has two parents who love him very much and for his sake we want to keep this situation as private as possible moving forward. We still have love for each other, will always cherish our time together and continue to have the deepest respect for one another."

Just to break your hearts even more, we look back at some of the funny duo's cutest and most swoon-worthy moments over the years.

When Anna realized Chris was "the one"

In an interview with James Corden in 2015, Anna said that "dead bugs" actually helped bring them together. "I had a bug collection. Dead bugs, humanely harvested," she said. "When Chris and I first started dating, he invited me over to his apartment and he [also] had a dead bug collection. I started to cry."

When she always loved his body unconditionally

Chris shocked the world when he debuted his newly fit body for his role as Star-Lord in Guardians of the Galaxy. In an interview with GQ Magazine, he candidly talked about his weight, saying, "I think Anna is hedging her bets that one day I’ll be fat again, and she’ll say, ‘Remember, honey, I always told you I preferred you this way.’”

When Chris said they were "meant to be together"

In an Reddit AMA while promoting Jurassic World, Chris waxed poetic about his relationship with Anna, calling them "meant to be together." He wrote, "Our relationship has made me believe in divine intervention and destiny, just as much as my crazy career and the way I fell into this life. She and I grew up 20 minutes away from each other but never met until we met in LA. We both got our start in horror spoofs. We both did an animated movie for Phil Lord and Chris Miller. We both made our careers playing guileless nitwits for laughs. We both have parents that have suffered with MS. The similarities go on and on."

I have found my niche. Hair stylist to the stars. I work for free. #BonjourFreedomBraid #lePlat #braidYOgirlsHairDAWG #man #manbraid #baller #vidalSassoon

When he braided his wife's hair every night

In 2014, Chris revealed that he actually had some impressive hair-braiding skills. In an interview, he said that his sister taught him how, and he would braid Anna's hair every night as a "nice little ritual." When the regular braids began to "damage" her hair, he took French braid lessons from his mother-in-law to help keep Anna's hair healthy.

When Chris got emotional thanking Anna during his speech

Chris finally received his own star in the Hollywood Walk of Fame in April 2017. During his emotional acceptance speech, he called Anna and his family "gifts" given by God. "I want to thank my wife Anna, I love you. You’ve given me so much. You gave me the greatest star in the galaxy in my little boy, I love him and I love you," he said.

Chris Pratt Anna Faris Breakup Celebrity Breakup
Your Guide to Thriving in This Strange New World
Staying
In? What to watch, what to eat, and where to shop from home
OR
Heading
Out? What you need to know to stay safe when heading out